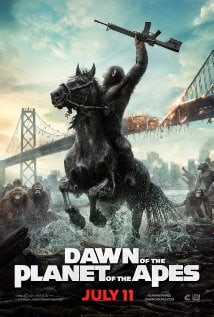 [xrr rating=2.5/5]Planet of the Apes may be the greatest mediocre franchise of all time. Following the runaway success of its truly classic first film, the Apes sequels, reboots, and reboots of reboots have fleshed out their doomsday vision of the world and delved into major themes such as social (d)evolution, the hubris of runaway technological expansion and war, insurgency, diplomacy, what (if anything) separates humans from animals and more. They have also never come close to the level of the original, more obsessed with unnecessarily filling in gaps of advanced primate life and human behavior than truly developing the series’ hotbed of ideas.

As such, it is possible to say that Dawn of the Planet of the Apes is the franchise’s third best of eight films, maybe even second only to the first, yet still an unremarkable picture. Matt Reeves takes over from Rupert Wyatt, and his style of competent but largely unexciting filmmaking defines the picture. Reeves’ work is derivative of generic predecessors, and here he mounts a series of homages to various war films. The ape stronghold in a park outside of San Francisco has an entrance dotted with skulls and various warning signs à la Apocalypse Now; the son of leader Caesar (Andy Serkis) finds himself in his first firefight late in the film and behaves like the easily spooked, perpetually hiding Pvt. Upham in Saving Private Ryan; and a climax atop a skyscraper mines similar sequences in movies like Darkman and Spider-Man 3. Reeves dabbles in such material dutifully, creating a parallel universe in which iconic and even hackneyed imagery is filled with apes instead of humans.

Reeves is a capable action director—it’s never hard to track the overall and shot-to-shot motion of his sequences—but this boilerplate workmanship works best in scenes outside of battle, where its simplicity leaves room for the film’s themes. Diplomacy is critical to the narrative, with war desperately delayed by Caesar and friendly human Malcolm (Jason Clarke) as fractious elements within each camp ache for slaughter. Speaking of post-apocalyptic movies with “Dawn” in the title, the film’s simmering tensions, at their best, recall a Romero zombie flick, only in this case the zombies have enough sentience to reason among themselves. Naturally, that doubles the chances for people (or apes) to compromise the safety of their own groups before the perceived enemy can act.

It’s an intriguing message, all the more so for taking place between humans and digitized apes. The computer-animated primates are so vividly real that one almost believes that humans are speaking to real creatures. It’s hard not to marvel at the detail of rain-matted fur, or of the perfect texture of a chimpanzee’s rubbery snout. It’s hard to fathom how much more realistic animation can get while poring over these details, and the tactile quality of the apes makes it far easier to buy them as the only characters of significance, engaged in touching displays of familial and social intimacy as well as internal strife. The humans provide little more than a disruption.

These loving touches start to feel like dead weight when the film sets to working out its themes in broad-stroke genre language that it mistakes for richly developed political analysis. If Dawn shares a thematic lineage with Romero’s Day of the Dead, in which an isolated pocket falls prey to the understandable wishes and fears of its individual members, it misses Romero’s lessons in simplicity, in which saying just enough leaves a greater sense of evocative depth. Reeves’ film escalates, but even as tensions rise, they do so with repetitive scenes that endlessly stress its point, setting peacemakers like Caesar and Malcolm against those with grudges—the tortured Koba, and trigger-happy and vindictive humans like Carver (Kirk Acevedo) and colony leader Dreyfus (Gary Oldman, helpfully dressed in black to be morally offset from the white-clad Malcolm). Sides are taken so early that the only tension comes from the inevitability of the angrier elements making their move, not in the far more insidious possibility of people being swayed to the other group. It’s thin stuff, but it’s packaged with a seriousness that provides a mask of maturity.

There are shots in this film that would be beautiful if the film did not stop and insist that the viewer find them so. The inherent absurdity of the material lends itself to images like a deranged bonobo riding a horse in front of a wall of petrol flames firing a machine gun in each hand as his fanged mouth hangs open in bloodlust and ecstasy. It’s a striking moment, but also a ridiculous one, and instead of playing up to the comedy of such a scene, the film consistently treats its subject with stifling severity. The audience at my screening chuckled at several moments of humans haplessly pushing themselves into yet another avoidable conflict, but this is a humorless film, and the po-faced seriousness underscores the filmmakers’’ fear that if anyone, for even a second, acknowledged how silly this all was, it would bring the movie down. If nothing else, someone should have pruned out some of the numerous scenes of characters, human and simian, crying single tears if we’re not meant to take at least some of this film as a joke.

In fairness, the original Apes movies only sporadically indulge in comedy, but the prosthetic masks added a level of remove that foregrounded the surrealism of the scenarios, then moved past it to attain what in the best films, is a surprisingly rich tragedy as yet undiluted by decades of homage and parody. Dawn, like Rise before it, regularly derails the momentum of its high-concept plot in order to make the case for itself as more than just a b-movie. But a movie about horse-riding apes using guns on a dwindling group of human plague survivors will always be a b-movie, and Dawn too often gets lost in overly intricate exposition and forced sympathy-baiting that turn an occasionally thrilling film into a drag. Planet of the Apes struck a balance between pulp and profundity; Dawn chases so hard for the latter that it saps itself of the former, leaving a thematically ambitious work as hollow as its competent filmmaking and intricately detailed computer animation.