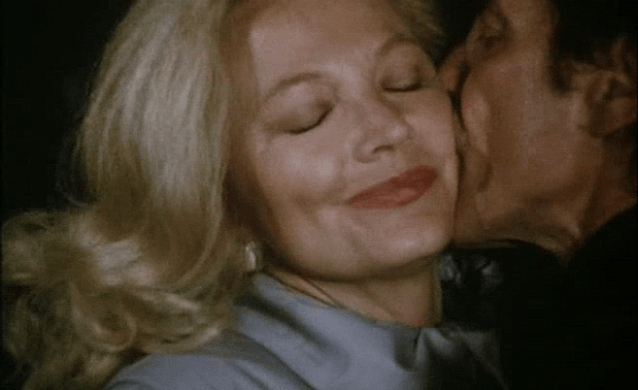 Though not technically John Cassavetes’ swan song, Love Streams is a fitting conclusion for a directorial bridge that sanded down the distance between performer and lens, and by extension performer and viewer. Cassavetes’ films all lack the taut, boilerplate sense of pacing held as ideal by Hollywood, but Love Streams is by far the loosest of his oeuvre; the improv-heavy Husbands is its only closes competition. Yet where that earlier midlife crisis film ambled around, this movie came after a diagnosis of the liver cirrhosis that would eventually kill him, and that news gives the film a focus that belies its lethargic and easily distracted movement. If Husbands is a movie about a man trying to figure out how to keep living, Love Streams is about that man seeking the best way to die.

The first few scenes of the film reflect the perception of someone who only now realizes how fast time moves. It begins with novelist Robert Harmon (Cassavetes) engaged in the breakdown of his latest relationship, but then shifts narrative focus to Sarah (Gena Rowlands), who’s mired in a divorce deposition with her husband Jack (Seymour Cassel). By cutting back and forth between Robert at home and Sarah in the last moments of divorce proceedings, Cassavetes gradually allows it to become clear that months have passed in the space of single edits, and the sudden realization of this lost time overrides all other concerns, such as establishing what links Robert and Sarah. Only after an hour into the film does Cassavetes finally get around to that trivial matter, revealing that the two are siblings.

Plot has never been a motivating factor in Cassavetes’ work, not even the neo-noir The Killing of a Chinese Bookie, but Love Streams’ narrative does not flow like its title would suggest, it instead drips like a leaky faucet. Sarah’s divorce meetings unfurl as a collection of insidious allusions on both sides, vague but damning talk of absenteeism and mental illness as Sarah and Jack’s teenage daughter Debbie sits quietly in the room, watching her parents lob volleys at one another as if attending a match at Wimbledon. The only truly concrete takeaway from the depositions is when Debbie at last speaks up to puncture Sarah’s desire for sole custody by saying that she’d rather stay with her father. Likewise, the details of Robert’s bacchanalian love life only coalesce when a long-departed lover shows up on his doorstep one day, introduces a boy named Albie as his son, then leaves the kid there for Robert to monitor.

Children do not usually have much place in Cassavetes’ world; it is hard enough to delve into the antics of adults without trying to navigate the emotional minefield of adolescence. Previously, the most significant kids part in one of the director’s movies was as a collective witness to Mabel’s breakdown in A Woman Under the Influence, too young to view her behavior with the fear that their father does but gradually approaching the cognitive point where they realize something is off about her. Debbie and Albie occupy similar roles, but they are old enough to process their parents’ failures: Debbie sees how toxically giving of herself Sarah is and finds her physical and emotional charity selfless, erasing the possibility of living her own life by spending it in devotion to everyone else. Albie sees Robert as the polar opposite, living in a kind of makeshift harem filled with booze, women and, in an especially cynical piece of self-comfort, kids that he can get a brief bit of emotional warmth from without having to deal with actual parental responsibility. The camera often homes in on Debbie and Albie when they are present, and both kids oscillate between observant silence and outbursts of anger, as if they are processing in real time the possibility that they may be predisposed to end up like their parents. 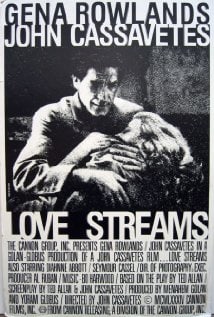 The film’s title alludes to an idea Sarah has as she reels from losing her family, a notion that “love is a stream; it’s continuous, it doesn’t stop.” If it does not stop, however, it can slow and divert like a stream, and contrary to the feverishly over-complicated efforts of Sarah to push love forward and Robert’s own attempt to dam it, it will always take the path of least resistance. At its heart, the film is a comedy: in an oeuvre filled with all-time classic drunk scenes, the sequence of Cassevetes throwing himself in the car of club singer Susan (Diahnne Abbot), driving to her place, crashing, then being unable to get out of the vehicle is a mini-masterpiece. The physicality of Cassavetes’ acting in this moment could be a precursor for Leonardo DiCaprio’s ‘luude scene in The Wolf of Wall Street: Robert turns into an assembly of arms and legs all connected to a mass of nerves without an organizing brain, and about the only thing he accomplishes as he tries to get out of the car is to cause noise, from leaving the door open until an alarm goes off to flipping on the radio and sending jazz blaring around the neighborhood.

Cassavetes cannot be accused of vanity: it’s easy now to say that it’s clear he was in ill-health during shooting. We’ll never know, but it can’t be denied that time and hard living had taken its toll. His face looks sallow and creased, while the distended stomach that gave away his liver condition can occasionally be seen. Cassavetes folds them into his performance, just as Rowlands perpetually looks frazzled and weary. Cassavetes can let his own poor appearance speak to Robert’s wealthy isolation and decay, but Rowlands has to keep pace with Sarah’s desperate attempts to find something, anything, to fill the loving void in her life.

When Sarah returns from a farm with a menagerie of animals in tow, it is only the deep sense in her eyes that this is a good idea that keeps the scene from derailing the film. Rowlands’ expressiveness is on display in her first scene, framed in three-quarter profile in the deposition as she suddenly decides to push for sole custody. Her eyes widen with ambition, but also unfamiliarity, as if this character somehow knows that the actress playing her tends to portray less self-actualizing characters in Cassavetes’ work. It’s the look of someone placing a toe in water and discovering too late that it is actually lava. If Cassavetes mines his own decay for grim laughs, Rowlands pushes her manic tactility to new levels. She holds hugs for too long, gets a bit too close to people when she speaks, and she can stop a conversation before it starts by calling the bluff of society at large when someone dares to ask the loaded pleasantry “How are you?” When one man asks her that, she eventually confesses, ”To tell you the truth, this is my first time, and I’m looking for the sex.” The camera then pulls out to reveal a bowling alley as the man, a clerk, helplessly responds, “Well you’ll need, uh, bowling shoes.”

In his review of the film, Dave Kehr made an astute observation about the director’s films: “Cassavetes is compelled to expose, expand, to apotheosize emotion; it is no wonder then that he is consistently drawn to themes of breakdown and madness—the only way the contemporary cinema can assimilate emotions of Cassavetes’s size is to characterize them as insanity.” And if Cassavetes never truly mitigates the outsized emotion of his work, his films nonetheless all approach a kind of ragged equilibrium that offers no easy answers but at least hints at the possibility of moving forward without total implosion. Love Streams dovetails into moments of surrealism—dream sequences of Sarah’s love for her family corroded into a frenzied murder wish, an abstruse connection to the film’s stage beginnings in a late scene in which a dog is replaced by a nude actor who played the canine on-stage—and its barely connected structure gives the sense of a slow petering out. But that looseness subtly probes its characters’ foibles and gradually brings the overly loving Sarah and emotionally distant Robert into a balance in which Sarah feels confident to exist for herself and Robert suddenly finds himself terrified to be alone.

That makes the film sound simple, but it will always be difficult to put Cassavetes’ gestural, sensual oeuvre into words. Love Streams, the most laid-back of his work, is also the most stylish, from those aforementioned dream sequences to the ingeniously isolating blocking that regularly places a character in deep background and uses corridors and doorways to push the person they’re talking to out of frame. So much of Cassavetes’ work is about proximity, and not just in the sense of the ubiquitous, and reductive, analyses of his use of hand-held close-ups, but in his attempt to remove whatever barriers exist between an actor’s every move and inflection and the way an audience perceives them as if interacting with the characters themselves. Love Streams, true to its conflict between suffocating affection and a near-total lack of it, mixes up this formula, but the occasional distance does nothing to change how immediate and identifiable and real these people are. The self-reflexive touches, then, become less a device than an attempt for Cassavetes to connect with the audience as much behind the camera as in front of it, and that final wave goodbye is more beautiful and resonant than the vast majority of postmodern flourishes. Love Streams is the final masterpiece of an inimitable master, and it sends the director off on a suitably emotional but endlessly thought-provoking bow.