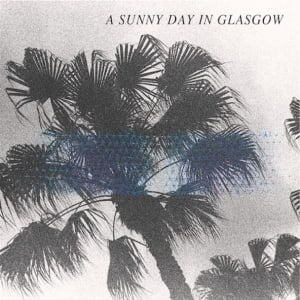 [xrr rating=1.5/5]In high school, I lived about an hour away from the beach. Not the traditional image of blue water and pristine sand. This was the Gulf of Mexico, which meant that on most days, the water was a lovely shade of brown. Waste from BP oil spills and trash from Galveston combined for water that was dangerous even on a good day. Once in a while, beautiful, crystal clear water washed in, drowned out by weeks on end of sludge colored ocean. This is how Sea When Absent comes off. A Sunny Day in Glasgow’s new album is discouragingly messy, apparently mastered by a deaf man, with production that drowns out the few glimmers of clear sea.

The band aims for a pop-shoegaze sound, with the pop part dominated by overwhelming and unnecessary noise. Lead single “In Love with Useless (The Timeless Geometry In the Tradition of Passing)” has a beautifully mellow intro with rolling toms that keep the rhythm while sliding guitars drift above. But the music soon becomes painful. Screeches of white noise back childish vocals and cut through the formerly pristine sound. Album closer “Golden Wave” backs singers Jen Goma and Annie Fredrickson with a piercing and infuriating high pitch that takes over their melody. The singers have lovely voices, but their words are unintelligible. Their floating delivery would be great for a quieter, more atmospheric record, but in this mess they barely register at all. The vocals sound like they were recorded well away from the mic while everything else was pushed to the forefront, making it difficult to focus on their vocals.

It’s one thing for an album to lack a coherent structure, its songs not unified by theme or mood. Sea When Absent is incoherent not just as an album but within individual song structures. “Boys Turn into Girls (Initiation Rites)” falls in and out of tempo, the drums in their own world as the song is wrapped in an annoying glaze of chiming sounds and keyboards. The ending section of “MTLOV (Minor Keys)” wades into cringe inducing dissonance, while the rest of the song is a fairly upbeat electronic track. Tracks change direction suddenly, without rhyme or reason. The under two minute interlude “Double Dutch” awkwardly stumbles in and sees itself out with a truly baffling ending where one of the singers laughing so much she begins to cough.

The production of this album should have been much better. A Sunny Day in Glasgow brought in Jeff Zeigler, who has produced The War on Drugs and Kurt Vile. Both of those bands have hazy songs, but their words are still distinguishable and the sounds don’t melt over each other into an unpalatable mess. This is a muddled, clutter-filled album that no amount of editing could have saved.