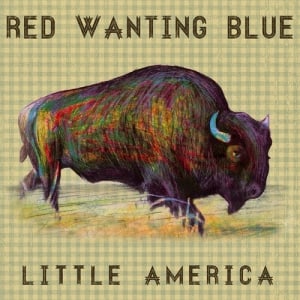 [xrr rating=2.0/5]Have you heard the story of the boy who sang “wolf?” Red Wanting Blue infuses every inch of Little America with an overblown sense of import and meaning, but the album fails to deliver on its promise, turning out to be little more than a tempest in a thimble. Perhaps if the lyrics were a bit more poetic or oblique, the songs might be able to support that kind of responsibility. But they’re buried under the fervor of Scott Terry’s vocals, which attack each tune with enthusiasm, stealing the show almost every time. Terry is a decent singer, but he has no idea how to give a nuanced performance.

The album starts with ”Hallelujah,” whose fade-in intro becomes a stirring march. Terry launches himself at his lines like the Proclaimers covering Neil Diamond’s “America.” But the opening words don’t give him much to work with: “We’re lost, I’m sure of it/ But I know the sun will rise again/ So, we will rise with it and try again/ To make our way home.” The band does seem lost. From that beginning, this song could go in two different directions; they could either tap into a personal storyline, or they could make a broader statement. Instead, they split the difference, juxtaposing specific memories with vague metaphors. The justification for the title, “… listening to Jeff Buckley croon/ The Leonard Cohen tune,” falls in the former category and various roads and signs fill out the latter. Against my will, I feel my posture straighten and my chin rise, responding to the relentless snare and string accompaniment. But after the bombast of the song fades, it’s hard not to feel cheated.

“Dumb Love,” redeems the album somewhat with a poppy bit of college radio rock. The members of Red Wanting Blue are competent musicians, and the production has polished them to glossy perfection, leaving Terry’s voice to provide the personality. He has the same gentle drone as Michael Stipe, but he’s spent a lot of time studying more extroverted singers like Bono, Bruce Springsteen and Brad Roberts (Crash Test Dummies), cherry picking from their most intense moments. None of those guys are bad influences, but they all know how to tell a story, and each has a good sense of dynamic drama that Terry could use.

Occasionally, the group finds a topic worthy of the weight. “Black Canyon” takes on life’s path and the promise of an afterlife. The idea is a good one even if casting Heaven as Black Canyon is less than obvious. But they still have trouble finding a solid message, instead settling for overworked metaphors and trite clichés. It doesn’t help that they’re short on lyrics; with two sparse verses and a single line bridge, they let the chorus do all the heavy lifting. Unfortunately, that makes weak lines like, “Happiness is a balloon/ So, we steer it proudly for the blind side,” stand out that much more. Despite the less than stellar writing, the tune is an earworm that won’t let you go.

Red Wanting Blue reaches their nadir with the country pop fluff of “Drawing Board.” It’s a goofy little ditty, but they lay it on thick, wondering whether to tackle love again, then tossing out the lyrical gem, “Heroes require damsels in distress/ A kiss requires lips, no more no less/ Love requires worlds to be shaken/ Success requires that I must bring home the bacon.” It’s like a perfect storm of WTF. Is Terry saying that love is a job? Is he trying to summon up some ambition? Has he ever had a soul kiss? Honestly, I have no idea. All I know is that neither the sweet female harmonies nor tight exchange of acoustic and electric guitar riffs can salvage this one.

Pop music has never required lyrical depth, and I’m sure the band has plenty of fans that love their anthemic delivery. Coupled with the silky production and session-quality musicianship, their hand-wringing theatricality is geared toward audiences that appreciate the music on “American Idol” or “The Voice.” Red Wanting Blue has a clear path to commercial success with Little America, but I’m still waiting for the wolf.