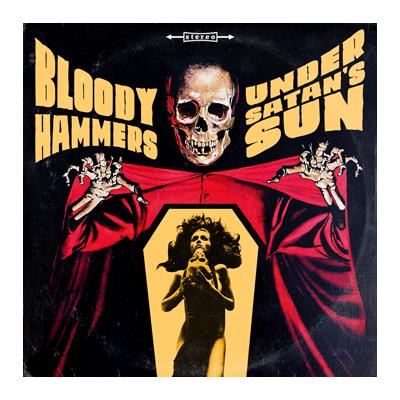 [xrr rating=4.0/5]Bloody Hammers are a bloody good four-piece out of North Carolina whose gritty, stoner-influenced brand of grunge-metal plays with some of the same B-movie schlock elements as, say, Rob Zombie, but with smoother grooves and a good bit less thrash. Less heavy than Electric Wizard but rougher around the edges than Blood Ceremony, Bloody Hammers have found the sweet spot in the midst of atmospheric, noisy, occult rock ‘n’ roll. Cue the necromancer references, kids!

Singer/bass player Anders Manga growls out the vocals in a tremulous tenor while behind and beneath him, tunes surge along on waves of thick guitar distortion and keyboard accents, all buttressed with suitably crashing drums. It’s not a particularly original formula, but the band do it with verve and commitment: like a solid late-night fright movie, Bloody Hammers get the job done when you’re in the mood for something blunt, cathartic and not especially subtle.

Lead track “The Town That Dreaded Sundown” is built around a sludgy, stuttering guitar/bass riff and silly lyrics about, I don’t know, a killer on the loose or something. Manga sells the story with his shivery voice, while the rest of the band bashes away vigorously. There’s no letup for the remainder of the album, either: the band reels off a string of memorable, foot-stomping tunes in the stoner-rock side of the heavy music spectrum, all benefiting from hummable choruses and wailing but not self-indulgent guitar noodling. Tempos tend toward the deliberate, with tracks like “Spearfinger” and “The Moon-Eyed People” built around midtemp riffs.

With most songs clocking in between four and five minutes, there’s plenty of time for tunes to find a groove and milk it. Title track “Under Satan’s Sun” bounces along with the help of a lively bass line, while keyboards crop up throughout the tunes. Make no mistake, though, this is a guitar album, of the distortion-heavy variety.

Solid tracks abound here, with the front half of the album being especially strong. Besides the abovementioned tunes, “Death Does Us Part” is a creepily effective little number, with Manga’s quavering vocals playing off nicely against guitar arpeggios and tinkling organ lines. “Welcome to the Horror Show” is another strong tune, one that pulls dials back the guitars a good bit and allows the rest of the band to carry the weight.

If there’s a criticism to be leveled here, it’s that the record is a trifle too consistent from start to finish, to the point that much of the back half is less memorable than the front. Despite the relative uptempo charge of “Dead Man’s Shadow on the Wall,” listener fatigue sets in, and the album closes more weakly than it ought. The thematic repetition of the album doesn’t do anything to help in this regard, either. Cheesy B-movie kitsch will take you pretty far, but after a while it grows as repetitive as song after song about girls ‘n’ beers. All of which is to say that closing track “The Necromancer” is less memorable than it ought to be, or that the album deserves.

This is a subjective criticism, of course, and fans of heavy music ought to check out the record, and the band, in any case. Under Satan’s Sun is the band’s third album, and solid enough to merit attention from the blood-drinking—err, I mean record-buying—public.