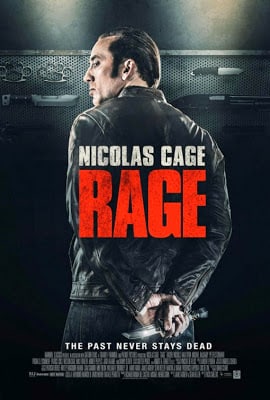 [xrr rating=1.75/5]Paul Maguire (Nicolas Cage) is a successful real estate developer with a criminal past in Rage. The movie’s antihero has turned into a legitimate businessman in the business of building, but his careful self-development completely falls apart when his teenage daughter is kidnapped and killed. Has his past caught up with him? Yes, but not in the way he thinks.

Rage repeatedly flashes back to a pivotal scene in Maguire’s troubled youth, a murder-heist that involved the Russian mafia. The bug-eyed antihero assumes that his daughter’s murder is related to his previous life of crime. Maguire easily slips back into bloodthirsty mode to avenge his daughter’s death, but he is ultimately done in by something he has held on to from his past, both literally and figuratively.

The criminal revenge melodrama has a long cinematic history. Rage has been called a lowbrow version of Liam Neeson’s Taken franchise, but the film also compares unfavorably to Charles Bronson’s seedy Death Wish series. The movie self-consciously aims for a more literary lineage, from repeated references to Shakespeare and a plot that recalls Jacobean revenge tragedy. But there’s a more direct correlation in Cage’s recent filmography: the 2011 3D thriller Drive Angry. In that film, Cage played a character named Milton (a nod to the celebrated poet) who leaves Hell to avenge his daughter’s death and rescue his kidnapped granddaughter. It was a ridiculous premise saved by b-movie flair and a vivid Cage performance full of the signature over-the-top fire that his fans love. The movie was trashy, but it was visceral, high-octane trash that was cathartic up to a final act that (ironically) borrows from The Wicker Man, one of Cage’s more infamous bombs.

Drive Angry showed that even b-movie Cage can be satisfying. Unfortunately, Rage seldom lives up to its generic title. The undistinguished script and supporting cast don’t help. Danny Glover has a thankless role as a police chief who knows Maguire from way back, and Peter Stormare, a usually reliable villain, plays a paraplegic old crime buddy named O’Connell whose thick accent doesn’t sound remotely Irish. Only Pasha D. Lynchnikoff (an appropriate name for a villain) as Russian mob leader Chernov brings any supplemental fire to the proceedings, but his distinct Belmondo-ish mug never gets to face off against sourpuss Maguire.

Most of the film is standard-issue formula revenge with sub-standard dialogue, and Cage, with shoe polish-dark hair that makes him look like Bela Lugosi, goes through his paces simply pouting and brooding and glaring. But there are three scenes here that are readymade for the next Nicolas-Cage-loses-his-shit clip reel. Cage has been criticized in recent years for bad acting, and I confess the first time I saw him in Herzog’s Bad Lieutenant: Port of Call New Orleans I swore I would never ever again see a Nicolas Cage movie. But subsequent viewings of Herzog’s film, and movies like Drive Angry, have led me to appreciate Cage as a consummate b-movie ham. Last year, after a screening of Bad Lieutenant followed by a Q&A with Herzog and Cage (what I would have given to be in that theater), Cage told the audience, “I have umbrage with the words ‘over the top.’ Well, you tell me where the top is, and I’ll tell you if I’m over it.” Rage would not have been saved by more of those over-the-top Cage moments, but it would have helped.

Filipe Felizardo & The Things Previous: After the Circle Vol. 9