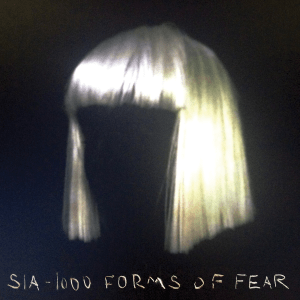 [xrr rating=3.25/5]Let me tell you a story about a girl who missed her first shot at pop stardom. Although her debut release was poorly received, she eventually found some success as a singer, but it looked like writing for others, such as Rihanna, Flo Rida and Beyoncé, was as close as she’d get to her dream of achieving big-time pop glory. Health problems and panic attacks threatened to sideline her into performance retirement, but she finally tapped into her well of struggle and pain, partnered with a talented producer friend and made her bid for the spotlight.

Sure, there’s a surface fit, but anyone familiar with Sia would recognize that this is not her narrative. In particular, she’s always been an introspective person with ambivalence toward fame, to the point that it seems she’s intentionally stayed to the background. Her latest release, 1000 Forms of Fear, is a reinvention because she’s putting herself back in the center with a strong array of songs that she could have easily sold to the pop superstars she’s helped in the past. But the biggest break in the patter is that she doesn’t embody the pop diva ideal, even if her songwriting satisfies all the pop tropes. Beyoncé, Rihanna, Shakira and the others are all packaged with fashionable production, catchy melodies and vocal showcasing, but more importantly, they also have an instinctive knack for staging and constructing an over-the-top public persona. This album is a credible attempt at gaining entry to the diva club, but, although Sia picks up on all the trappings, she can’t quite find the right image to make it click.

That’s not to say that she should sculpt her stage façade with an eye to the pop audience, but, if that were her intent, she’d likely fall short. Ultimately, Sia lacks the necessary larger-than-life character, but, to her credit, she is still just the right size to fit her own life and imbue it with a natural poise. Rather than a cardboard cutout, she’s like any other real person; she doesn’t have only a single face and she expresses that complexity here with a scattershot collection of songs. Each one aspires to some flavor of pop perfection, but together they make a cracked mirror reflection of the current pop scene. From track to track, it’s interesting to imagine the right star to run with the tune, but Sia’s rawer voice and personality give the songs a depth they might have otherwise lacked.

The first track and lead single, “Chandelier,” sets some immediate expectations. The sparse start sets up a soulful groove as her pouty voice slurs through the first verse, but the chorus goes big and she soars to her upper register. It’s all too easy to let the lyrics glide past and just hang onto the tagline of the chorus, “I’m gonna swing from the chandelier,” hearing it as an indulgent brag. But the opening line, “Party girls don’t get hurt/ Can’t feel anything,” casts the whole tune into a more damaged space. A closer listen reveals that this song is a cry for help and the club party sound is just a mask. That charade may not slip until the third or fourth time through, but once it’s seen, it can’t be forgotten. That frisson of fear and desperation is a direct connection to the album’s title.

My favorite track, though, is “Straight for the Knife.” Like “Chandelier,” the musical mood and the lyrics are at odds. Sia sings the languid ballad with a distant detachment as the words run through a codependent tale of mistreatment. Her bruised fatalism captures a kind of doomed beauty as she sings again about swinging, but this time from the rafters instead of the chandelier. The song works, in large part because they don’t overproduce her vocals, which would have glossed over the expressiveness of her performance.

Most of the other tunes are pretty good, too. But it doesn’t take long to feel distracted by the uneven flow, because these tracks really mix it up. Swooping soulful singing in “Eye of the Needle” sits alongside the bouncy pop of ”Hostage.” The raw vulnerability of “Fair Game” is pressed up against the choppy defiance of the Dido-produced “Elastic Heart.” While that lack of polish might keep 1000 Forms of Fear from propelling Sia’s career to the next level, it still makes for an enjoyable listen.