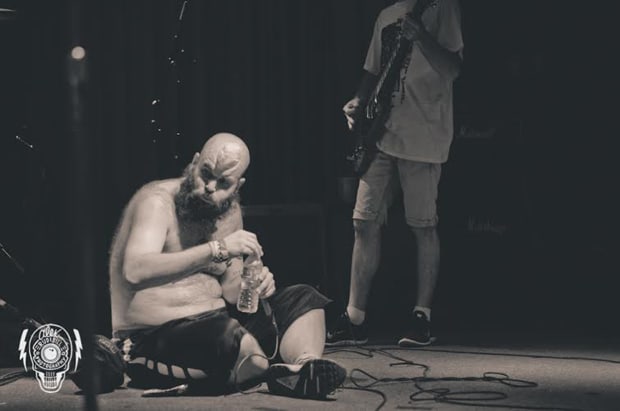 Let me start off by admitting it has been over a decade since I last moshed. Once I surpassed the age of 18 or so, the notion of deliberately paying for random bodies to come bashing into me just lost some of its zeal. That doesn’t mean I have totally avoided the pit; like many punks-turned-“professional” I now just take in the energy a safe distance from the nearest flailing arm. No matter where one stands during a Fucked Up performance, it is hard to avoid this excitement – Pink Eyes is sure to bring the mayhem to all parts of the floor.

Before the frontman had the opportunity to wrap his sweaty body around nearly everyone in attendance, Vancouver’s Weed attempted to prime the late arriving crowd for the headliner’s raucous shenanigans. However, only two songs into their 30-minute performance the rhythm guitarist was forced to set down his instrument while dealing with a broken guitar string. With news about beloved icon LeBron James supposedly dropping that night (the actual announcement ended up being postponed) Will Anderson was happy to momentarily humor a few in attendance with a dialogue on the free agency market. For those in the Beachland who decided to take refuge from the LBJ talk at the show, this conversation was a deciding factor to imbibe on another beverage from the bar.

What seemed like a light crowd only moments before Weed wrapped, the intimate venue neared capacity during an extended soundcheck that saw the soft-spoken Mustard Gas and 10,000 Marbles actually checking their own equipment with the board – a little surprising given their status as Mercury Prize winners. No matter how prolific the hardcore outfit might become, their live set attests that they will always stay humble.

Between performances of fan favorites like “Echo Boomer,” “Queen of Hearts,” “Led by Hand” and “The Other Shoe,” Pink Eyes took the time to wipe the moisture from his body to address the history of the Cleveland punk scene. The collective had a firm grasp on the history of their genre, discussing the international influence of Rocket from the Tombs and Pere Ubu. After methodically tossing a fan from the front of the stage into the awaiting arms of the first few rows, he then stopped the set to address the recent passing of Hank LoConti – longtime owner of seminal Cleveland rock club The Agora and one of the first men to ever bring the band to the Midwest.

Although personally taking in the show adjacent to the sound board, a few dozen revelers risked a fall to the floor to intermittently be hoisted on their peers’ shoulders in attempts to come face-to-face with the outfit. The work wasn’t truly needed as Pink Eyes made his way down to the floor, equipped with an extra-long mic cord, to personally greet everyone who made the trek that night. That sense of unity and broken barriers is the meaning essence to Fucked Up live hysteria. We are all on our own journeys, but we all must age, experiment, love, lose and forget; that is what Fucked Up wish us to remember. And for one night, when the rest of Cleveland was united in bringing LeBron back home, those at the Beachland were celebrating the comedy simply known as life.