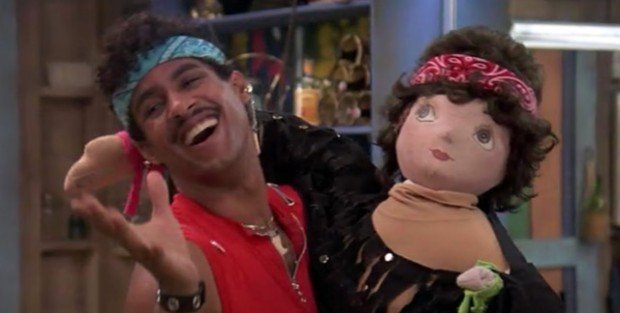 I’m of the generation where somebody at my high school graduation moonwalked up the aisle. I was embarrassed for him and for society. I never liked breakdancing; I found its forced, robotic moves anathema to the graceful athletics of a Fred Astaire or Gene Kelly, whose movies I was anachronistically drawn to while the rest of the teenage world learned how to get down.

In retrospect, I still don’t like the jerky, unnatural movements of breakdancing, but that doesn’t mean I wouldn’t give a lot to see dancing that good in aStep Up movie. Time has been terrible to Breakin’ 2: Electric Boogaloo, the movie so universally dismissed that its subtitle has become shorthand for the ridiculously unwanted sequel. Yet the low bar set for the contemporary pop dance movie makes me long for the golden era of breakdancing movies. Breakin’ 2 is by no means a good movie; its script is formulaic, its acting wooden, its dances dated. But it’s an honest, un-cynical movie, and oh those colors. The ripped-fabric, Day-Glo fashions make today’s audiences cringe the way I cringed when a classmate commemorated his matriculation with a moon walk. But you know what? Those tacky colors were actually perfect for separating dancers from their backgrounds, and even the robotic moves that so made me wince now seem like a cultural metaphor for a society increasingly dependent on machines, even before mp3s and smartphones (where’s your technologically-informed dance now?)

Breakin’ 2: Electric Boogaloo is impossibly cheesy and winningly infectious, drawing you in with irony but eventually winning you over with earnest innocence and optimism. The plot is part of a long line of let’s-save-the-farm-and-put-on-a-show movies, up to and including theStep Up franchise. As the movie opens, Kelly (Lucinda Dickey), one of the returning characters from the first Breakin’, is finishing up a gig as a chorus girl. She goes home to her parents, who helpfully remind her and the audience that Kelly turned down an education at Princeton to hang out with her street friends. Kelly drives her fancy convertible from her parents’ mansion to a rough part of Los Angeles (was this distinction made in Los Angeles Plays Itself?) where her street-dancing friends, including buddies Ozone (Adolfo “Shabba-Doo” Quinones) and Turbo (Michael “Boogaloo Shrimp” Chambers), two more returning figures from the first film. 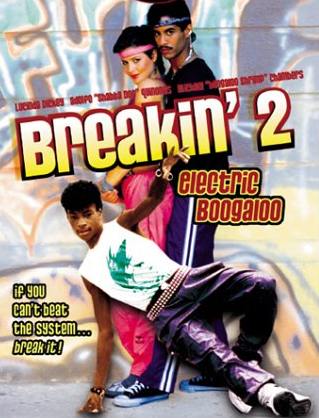 The old gang’s beloved house venue, Miracles (as in, “we’ve gotta save Miracles!”), is threatened by developers (a well-worn plot line lifted wholesale for Step Up Revolution), and so the evil businessmen in their suits battle the neon kids from the streets. And I do mean battle: at one crucial junction, the evil developers pit bulldozer against street dancer, leading to an image that bears a remarkable resemblance to the famous “Tank Man” that came out of the 1989 protests at Tiananmen Square. I’m not saying that brave Chinese protester was definitely inspired by this 1984 film, but you never know.

Breakin’ 2 may have appropriated street culture, but it really does take you to the streets. After the first Step Up film, set in gritty Baltimore, the rest of the franchise has been set in urban areas (New York, Miami) scrubbed of identifying marks of chaos. One look at the opening production number in Breakin’ 2, as Kelly, Ozone, Turbo and the gang dance through the streets of L.A. past real graffiti and real low-income housing, you’re shocked that once upon a time you could see real social struggle in even the most mainstream pop pulp. Director Sam Firstenberg’s simple vision is silly but endearing. As the kids dance through the streets, everybody joins in with their own terpsichorean voice: the elderly, police officers, construction workers and eventually, in the movie’s most inspired and insane set piece, the entire staff of a hospital, who take a break from their jobs saving lives to moonwalk and breakdance, their relentless beat even reviving the dead.

Kelly is caught in the middle of the movie’s class war. She’s a rich girl who wants to dance, and whose friends from the wrong side of the street fall into the common pattern of teaching the white girl how to get down (she teaches them how to love). Kelly is offered a big dance audition in Paris, just at a time when her friends need her to help save the farm/dance venue. Will she go to Paris or will she save the farm? Her parents watch the television coverage of the kids’ desperate fundraising measure, finally admitting, “You know you gotta hand it to those kids – they really fight for what they believe in.”

I can’t promise you won’t laugh if you revisit Breakin’ 2 – in fact, I’m sure you will. But open up your heart to this homely stepchild of cinema, and you may find you end up laughing with it, celebrating a time when mainstream pop culture, even when it was appropriating the language and styles of the street, had a personality that asserted itself even in the most artificially manufactured product.