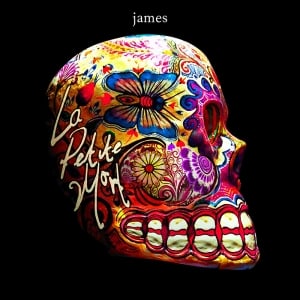 As its title implies, La Petite Mort is a reaction to death (and doesn’t shy away from sex); the death of vocalist Tim Booth’s mother, the death of his best friend, Booth’s well-known childhood brush with mortality. Yet James’s thirteenth proper doesn’t sound morose or even overly contemplative—instead it’s frequently joyful, exuberant and energetic. In interviews, Booth explains that these formative losses have reminded him to live in the moment, an optimistic method of grieving that informs these new songs.

With only a few exceptions, La Petite Mort comes off like the James version of a dance record, complete with floor-ready beats and EDM synths. The band makes make it work, but it feels like an odd use of their talents. Andy Diagram is back after James’ pop-leaning Mercury stint, and his contribution is essential to the sound James has developed over twenty-odd years, though his trumpet parts could have easily seemed out of place among square floor beats and glossy production. La Petite Mort nevertheless sounds like a record from the Manchester veterans, even if the overall shine is too smooth for a band that made its name with folky sing-alongs and moody Eno-produced pop. It’s also an interesting contrast to the artful ambitions of the band’s wonderful 2010 EP set The Morning after the Night Before.

At first, it’s not apparent that the album has anything to do with personal tragedy. Booth turns in one of his most stunning performances in years on the call-to-arms opener “Walk Like You,” a sprawling chorus-heavy take on sneering youthful rebellion. The multi-part pop builder starts off as a soaring vocal number over a simple piano melody before culminating in a dizzying jam, bursts of horn taking over as a fiddle part twirls about. “Curse Curse” is a jarring transition, its blaring siren-like house synth introducing the song’s strong EDM flavor. The song recalls the early James hit “Laid,” Booth singing about overhearing the neighbors’ romp and dousing a single traveler’s ardor with hotel-bar tequila. Later on “Gone Baby Gone” James oversteps with the same giddy dance-music inclinations, a tinny synth and repetitive refrain (“Gone baby gone/ Baby gone/ Baby gone”), obscuring the song’s engaging bass texture and otherwise salvageable melody.

Though “Moving On” directly brings up the memory of loved ones and looking to a future without them, the second half of La Petit Mort is where Tim Booth’s writing motivations surface, finishing up with the album’s most emotionally resonant compositions. Nocturnal ballad “Quicken the Dead” and closer “All I’m Saying” are the most powerful of the album’s topical pieces, the former succinctly encapsulating Booth’s resolution to love after the death of his best friend. “All I’m Saying” combines the dance-music sensibilities used so heavily throughout La Petit Mort with one of James’ dramatic rock ballads—a pop hybrid style that feels more true to the band’s songwriting career—the square beat picking up as the track builds and ending with a haunting processed vocal. It’s a memorable way to end La Petit Mort: the point where the album’s stylistic choices are rendered not only in the most effective manner, but also in tandem with Booth’s deeply personal sentiments.