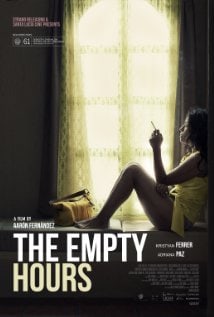 [xrr rating=3.0/5]Don’t expect a particularly eventful film with a title like The Empty Hours. And when the subject matter concerns a teenage boy wiling away those empty hours at a rent-by-the-hour motel, expectations certainly meet reality. This leisurely second feature from Mexican director Aarón Fernández Lesur presents a story more conducive to anecdote than feature length film, revisiting the theme of a young boy’s sexual coming-of-age. All told, when the two main characters aren’t together, the film has little to offer to advance the plot and reverts to quiet introspection against the backdrop of beachside Veracruz, Mexico. Sparse almost to a fault yet presented with such a delicate hand that it rarely feels dull, The Empty Hours is a languid meditation on complicated human relations.

17-year old Sebastian (Kristyan Ferrer) is put in charge of the seedy motel when his Uncle Gerry has to go to the city for medical tests. Luckily, it’s the off season, so Sebastian can handle the handful of customers and few menial tasks that running the motel requires. Day to day, he changes sheets and tidies the rooms in the absence of a reliable maid. His hormonal urges are only compounded by working at a motel frequently used for illicit trysts. Since, as Uncle Gerry sagely advises, “the most important thing in this business is discretion,” Sebastian is bored and lonely; the guests avoid any interaction, and even the seemingly friendly coconut seller across the street is an amateur hustler.

In his desperation for human interaction, Sebastian latches onto Miranda (Adriana Paz), an estate agent in her thirties trying desperately to sell holiday condos in the area to non-existent customers. Left waiting for hours, if not stood up, by her married boyfriend, Miranda strikes up friendly conversations with Sebastian and the two seem to recognize their mutual loneliness and develop a decidedly ambiguous relationship bordering on the sexual but often rooted in feelings of regret and inadequacy.

Fernández quickly strikes a balance between portraying Sebastian’s boredom and the derelict charm of his run-down yet jovially pastel-colored motel. The camera never hides Sebastian’s loneliness but rather relishes his quiet moments, with sequences following him about his daily work pointedly depicting the teen as an inconsequential speck crowded out by peeling paint and mountains of laundry. Languid wide shots are well constructed staples that linger but not at the expense of pacing.

While very little may happen in terms of plot, Fernández excels with character development. The “empty hours” of the title may initially only seem to apply to Sebastian but Fernández expertly crafts a narrative helmed by both Sebastian and Miranda. Highlighting their mutual isolation – with the emphasis on Sebastian – the script positions Miranda in a similar, if not more soul crushing, isolation. Certainly, Sebastian sees her as a mature and exceedingly desirable woman but on an impromptu trip into town Fernández’s script changes Sebastian’s and the audience’s perception of Miranda. She takes Sebastian to a bar/night club ostensibly to salvage a disappointing night but also for him to meet a girl closer to his own age. Slightly drunk and momentarily unguarded, Miranda regretfully admits that she has missed out on being a wife and claims to prefer being a lover (albeit to a married man who can’t manage to keep his motel trysts). Thankfully, her regrets make her a sufficiently complex character to bring some meaning to this simple story.

At its core, The Empty Hours is an all-too familiar tale executed adeptly yet without surprise. There’s very little to criticize in Fernández’s direction save a few unnecessarily prolonged sequences. The performances by Paz and Ferrer breathe life into a fairly clichéd premise, with Ferrer somehow managing to make the vacuous enthralling. While not an incredible feat, it is a perfect illustration of Fernández as skillful technician.