January 26, 2021
Home Books The Most Dangerous Book: by Kevin Birmingham 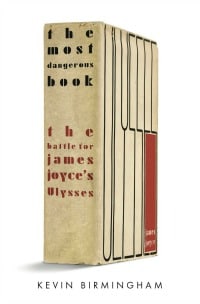 [xrr rating=4.5/5]Not a biography of its author but of his most famous novel, Kevin Birmingham’s study of Ulysses emphasizes what nine decades and eight major biographies of James Joyce have not. The “rapture and pain” of its creator and his creation, this Harvard professor avers, energized its modernist impact. The Most Dangerous Book, therefore, skims past much of Joyce’s by now exhaustively documented life, to saunter past some of his literary influences, and to connect Joyce vs. censorship to the new century’s unrest.

While much is familiar to students of Joyce, Birmingham’s endnotes attest to his archival research. He examines eye disease treatments, anti-Catholic tracts, and subversive newspapers, for instance, along with many Joycean contributions, standard and marginal, that help us understand this context. He writes with admirable directness. He efficiently guides readers through the difficulties for Joyce and his supporters which loomed as the forces of censorship by the various state authorities fought those who challenged pieties and proprieties. For example, Birmingham fills in the early twentieth-century reactions to obscenity by depicting how Britain was under siege, according to the Crown forces, from a violent, bomb-throwing and knife-slashing faction with a dangerous radical ideology. Against this, Scotland Yard invested in the latest technology to keep Londoners safer. The culprits were suffragettes, and the counter-terrorist ploy was the department’s purchase of their first camera.

How Joyce fits in, Birmingham shows, comes via not only his patron and inspiration Ezra Pound, as is well known, but by Dora Marsden, whose militant feminism radicalized Pound. In turn, Emma Goldman’s anarchism squares off against the publisher of The Little Review, Margaret Anderson, to deepen the tension in the Vorticist (radical) and then the Egoist (apolitical) movements for artists. Pound wrote for that fledgling review, while patron John Quinn had boosted the Armory Show in Manhattan, a vanguard for the forces from the art world parallel to emerging talents within literature. Going beyond the Irish setting for the novel itself, this attention stirs up the ideological debates by which Joyce and his associates took up the protests and demands of their restive, brooding era.

Modernist magazines afforded writers a platform akin to today’s blogosphere. Such bold support confirmed Joyce’s resolve, as he joined his own “philosophical” anarchism to a “literary” form, in Birmingham’s interpretation, to undermine the tyranny of a ruthless state. “Individuals were crushed by big ideas.” Joyce countered by obscenity (as defined by the state) to protest.

In Trieste, as the Great War broke out, Joyce began his big book, superimposing the Dublin he had left behind on a Homeric grid, and elaborating in increasingly experimental chapters and styles of prose, his take on ancient myth reborn in his home city. Birmingham finds that Ulysses opens with choppy, fragmentary rhythms of conscious awareness. These ebb and flow, as if “a rusty boot briefly washed ashore before the tide reclaims it.” As the novel in progress was serialized in the little magazines, large forces grouped against its supposed obscenity, and part two narrates the showdown.

Fearful of Reds and Germans, before the FBI as we know it now, the vigilant U.S. Post Office clamped down on any material deemed dangerous. Joyce’s anarchy might be far more philosophical than overtly political, but it fell into the net cast by the Federal trawlers in the wake of the Espionage Act. Birmingham connects the Comstock Law and nineteenth-century jitters about pornography to twentieth-century unease over radicalism: Joyce’s work-in-progress appeared to violate restrictions against lewdness in the U.S. Mail, as sent to subscribers of The Little Review, whose editors had defended the reviled Emma Goldman. With Joyce’s content flagged, its May 1919 issue was banned.

Meanwhile, Harriet Weaver had also been serializing the novel, in The Egoist. T.S. Eliot through Pound and Virginia Weaver through Weaver begin to pay attention to Joyce. They may also be some of the first readers as bewildered by its increasingly daring departures from conventional narrative as generations since–who after all have industrious scholars and encouraging interpreters to guide them. As Birmingham reminds us, Joyce sought to write not a story for a million readers, but one a single reader could read a million times. The playful prose burst forth as its author grew more confident. As the scholar finds in its subject, who began when writing erotic letters to his Nora Barnacle an entry into the “unwritten thoughts that go on in his mind,” so Joyce treats “readers as if they were lovers.”

Despite Joyce’s painful eye surgeries (and see Gordon Bowker’s 2012 biography for more of the “pain” that accompanies the “rapture” in Joyce’s Parisian and Zurich years in exile as he labors on), success beckoned. In postwar Paris, the milieu of the novel’s printing during the Lost Generation grounds it in the Left Bank’s “café culture.” But America, frightened by bombings, cracked down with a Red Scare. Ulysses would soon be linked not only with obscenity but to “parlor Bolshevism.”

Anthony Comstock had fulminated against contraception in the mail, and his successor John Sumner, newly appointed to suppress vice on behalf of New York, extended his control over Red propaganda in The Masses and anarchist rabble-rousing to attack The Little Review for a salacious episode, Gerty MacDowell’s “fireworks” on Sandymount Beach in what would be known as the Nausicaa chapter.

The New York City District Attorney’s Office required John Quinn, a lawyer too, to mount a defense, but his disgust appears to have overwhelmed his earlier sympathies for Joyce and his disreputable companions. For, Quinn’s reservations about the Nausicaa portion notwithstanding, he and Pound had tired of the “unreasonable” stance asserted by a Joyce whom, with his novel yet to be completed, refused to assuage the censors, while incurring legal costs and penalties nobody could easily resist.

On the author’s 40th birthday early in 1922, Ulysses was published by Shakespeare and Company in Paris. Joyce could not stop fiddling with it. Even during temporary blindness a few months earlier as a time away from the manuscript, he kept tinkering mentally with refining its elaborate structures. With the novel out, more troubles rushed in, for now, the typos massed and worried him. But the revolutionary nature of it, which to us dims nearly a century later, cannot be denied: “It demanded complete freedom. It swept away all silences.” Shattering verbal boundaries, it rises.

Ernest Hemingway, with perfect timing, enters Sylvia Beach’s Parisian bookshop to assist smuggling the novel into the U.S., by way of his contact, Chicago socialist editor Barnet Braverman, who by 1922 under the restrictions of Red Raids had to work at an ad agency to get by. Joyce’s patron Harriet Weaver, in London, founds the Egoist Press to print the novel. During 1922, the allure of a censored import, coming from London now and Paris, increases overseas demand for a forbidden book.

Then, the Port of New York authorities swooped in. Customs authorities in London did too. Eight editions followed, but distribution lagged due to censorship. Officials aiding a single copy’s importation into America faced a fine of $10,000 dollars and up to 10 years in prison. It took Bennett Cerf’s Modern Library imprint at Random House–which marketed classics old and new to a discerning readership on campuses and after graduation– to defend the novel in the U.S. The cover, shown on the cover of Birmingham’s book, did not appear until 1934 after another legal battle. Random House took on not the Comstock Act but the Tariff Act prohibiting the importation of obscenity. One charge was easier to disprove in court than the many dangers the Comstock Act listed. Cerf, a wit and a pundit too in the quest (and indirectly his roguish predecessor whose corrupted “Paris” edition was used illegally in the U.S., the literary pirate Samuel Roth), finally triumphed.

Birmingham provides a lively, learned yet accessible and welcoming survey of this struggle. He intersperses enough of the novel to orient readers, and he blends in the difficulties of Joyce’s life as he weakened in vision and endurance, to prove the heroic nature of his artistic achievement despite his personal tetchiness. This may encourage readers to begin or return to Ulysses, their next book to read.