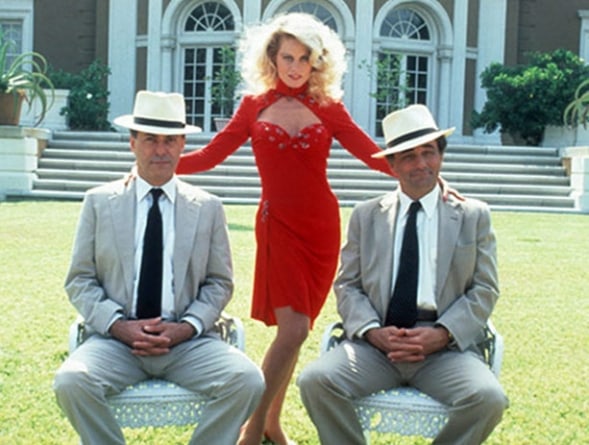 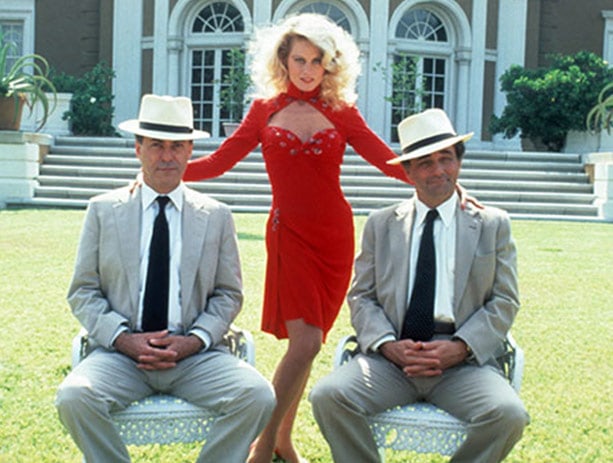 In the wake of his breakthrough independent debut, John Cassavetes took on two consecutive studio projects, for-hire assignments which, while reasonably fitted to his tastes and skills, stick out as clear oddities in the director’s overall canon. Cassavetes returned to self-autonomy with 1968’s Faces, and continued pursuing his own projects for the next 18 years, accepting one last mercenary assignment with Big Trouble, taking over for screenwriter Andrew Bergman (who later took his name off the film entirely) at the advice of longtime friend and collaborator Peter Falk. Reflecting its troubled production, Big Trouble is a much worse movie than either of those two early experiments, yet it bears the Cassavetes stamp all the same, albeit as a manic, streamlined version of his usual material, in which the familiar shouting matches and anarchic restlessness result in a shriller, much flimsier film. A mishmash assortment of story fragments that grows evermore outlandish, seemingly to disguise how little sense it makes, it’s also a wild, often riotous train wreck, made palatable by Falk and Alan Arkin’s performances and its general oddness, which is fascinating until it becomes off-putting.

The little enjoyment to be had here is, of course, undercut by the fact that this shaggy piece of junk stands as the final effort of such a brilliant, iconoclastic director. It’s especially tragic coming right after Love Streams, Cassavetes’ best film and the most grandly developed expression of his prevailing thematic concerns. Penned by Bergman to capitalize on the success of his The In-Laws, Big Trouble is a frenzied screwball take on Double Indemnity, one that blows through its source material early on, concluding with a mad series of twists and turns that push it into outright absurdity. This is initially intriguing, in the way that only a big-budget movie with a total disregard for Hollywood conventions can be, and its complete destruction of genre standards would probably be more satisfying in a different context. Instead, the ramshackle nature of the script and Cassavetes slack, undistinguished direction makes it feel like everyone involved was just screwing around, and the end product reeks of incompetence rather than invention. 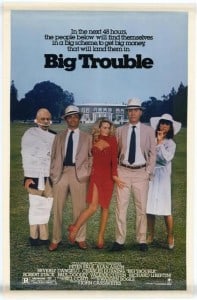 The plot revolves around exhausted insurance salesman Leonard Hoffman (Arkin) who’s introduced as the weak link of his otherwise perfect family, complete with three sons—musical prodigy triplets with a penchant for matching outfits—who’ve just been accepted to Yale. Unfortunately, Leonard’s meager salary can’t handle the load of their tripled Ivy League tuition (totaling a now-quaint $60K), and he plunges into despair upon learning the boys haven’t been granted a scholarship. This leads to one of the film’s best scenes, as a humbled Leonard tries to beg his well-connected boss (an effortlessly unctuous Robert Stack) for a scholarship recommendation. Instead he gets lectured about the importance of earning your own way in life, as the boss discusses his soon-to-graduate son’s junior VP position at the firm and tours an entire safe full of priceless family artifacts.

Leonard’s desperation finds an outlet when he meets Blanche Rickey (Beverly D’Angelo), an ingénue in search of a new insurance policy for her husband, Steve (Falk), an overbearing boor in safari gear, introduced as hoodwinking his Chinese day laborers into accepting junk mail as payment. What follows picks up on the Double Indemnity of an inside-job murder committed in search of a fat insurance payoff, although this time it’s spun as a mercy killing, with Blanche maintaining that Steve is terminally ill and wants to be put out of his misery, with the simple caveat that the homicide be a surprise. Frantic for cash, Leonard falls into the scheme, which of course crumbles spectacularly; the femme fatale, and nearly everyone else involved here, are eventually revealed as swindle-minded actors, the first of many bizarre narrative shifts. This first twist at least seems promising, especially for an auteur innately concerned with notions of performance in everyday life, but Big Trouble never gets anywhere close to a coherent idea, existing as a fragmented series of overplayed scenes, interesting only for the powerful charisma of its actors, who themselves seem confused about how straight to be playing this peculiar material.

A less-than-pointed satire of wealth, class and power, this slipshod experiment ends up at the fringes of a certain ‘80s genre, matched up in spirit with the decade’s wooly slobs vs. slobs comedies, which envisioned social upheaval fomented via comedic chaos. It’s closest counterpart is probably Robert Altman’s similarly antic, irreverent O.C. and Stiggs, another class critique muddied by its single-minded devotion to mayhem. But while that film felt like a natural example of excess for a director who made a career of shoving boundary-pushing ensemble pieces through the studio system, Big Trouble seems less organic and far more desperate, the work of a director rushed by a disastrous production into the realm of self parody.

This makes for a comedy in which none of the performers seem to be on the same wavelength, and it fails to hit a consistent tone, which makes the flights of fancy even more jarring. The plot gets especially tangled in the late going, as the once-simple scheme escalates into a mess of kidnappings, conspiracies and terrorist plots. This never entirely stops being amusing, thanks to Falk’s game turn as an irascible millionaire, D’Angelo’s work as the maybe-ditzy, maybe-faking it actress wife and Arkin’s increasingly frazzled straight man, but all three seem to be working on different planes. As a black comedy with a more concrete real world setting, dropping the parody angle and snipping off most of the story, Big Trouble might have worked. Maybe with more time and more freedom Cassavetes could have turned this lame duck of a project into something viable, but it wasn’t to be. Time ran out, and the film that resulted is mostly dispiriting, a pitiful last testament to one of Hollywood’s preeminent black sheep.