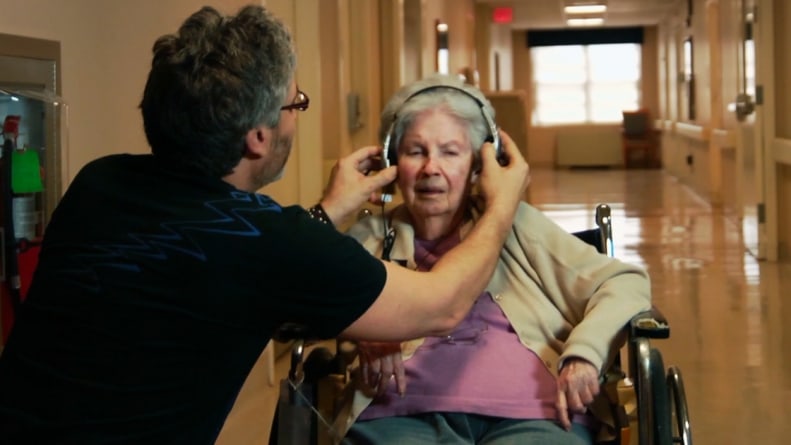 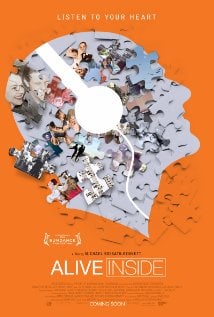 When we meet Henry, he’s practically catatonic. His daughter tells us how vibrant he once was, and photos of the young Henry show a debonair, stylish man full of life. When an assistant at the nursing home where he lives fits headphones onto her patient and plays him some music, Henry starts vocalizing, at first painfully out of tune. This is one of the heartbreaking scenes in Alive Inside, a documentary about the use of music to reach elderly patients suffering from dementia. If the film were simply made up of sequences like this, it would be a harrowing and moving experience. But director Michael Rossato-Bennett all but ruins great material and good intentions with techniques that slather his inherently sympathetic subjects in cheap sentiment.

The music awakens Henry, revealing the life inside that seemed irreparably closed off. Once Henry has heard music, an interviewer asks Henry questions about his life and love for music, and he’s alert, wide-eyed and charmingly open. He regains his musical ear, singing a song for the camera that lets you know this man has a voice.

Footage like that should be gold for any documentary filmmaker. This material doesn’t need anything else to convey its message. But the director spoils it again and again. All-caps text flashes on the screen next to Henry, echoing his newfound voice: BEAUTIFUL DREAM LOVE FEEL. Whoever thought this was a good idea turned this great human interest story into a slick infomercial or public service announcement.

In the hands of Werner Herzog, or even a journeyman documentary filmmaker who knew the meaning of directorial restraint, this could have been a four or five star documentary. But whenever the movie cuts away from its heartbreaking subjects to a chart or a diatribe or an “authority,” whenever you hear the Sensitive Narrator with the dramatic pauses who sounds like the hippie teacher on “Beavis and Butthead,” whenever the rippling piano score reminds you to feel sentimental (as if you didn’t already), the movie takes a horrible step in the wrong direction.

This generally well-meaning if terribly maudlin and ultimately exploitive documentary beats you over the head with Happy, from the glowing smiles of elders with headphones on to the saccharine piano soundtrack. I hope the filmmakers never end up in the mentally deteriorated state of their subjects, but if they do, playing them that insipid music may well send them into a horrific tailspin that buries them in the darkest levels of the psyche where (product placement and potential sponsor alert) no Apple device can reach.

The movie becomes an indictment of pharmaceutical companies and nursing homes, and they may well be worthy targets of opprobrium, but the heart of this film should be the patients, not charts and agendas. Dan Cohen, founder of the nonprofit organization Music & Memory, makes some good points, indicting the health care industry for spending anything on pill therapy but not covering his music therapy. Yet the film’s most convincing argument for its case lies in patients like Henry, and any attempt to provide evidence turns the film from a human study to a position paper. Worse, footage of an African thumb piano player is terribly patronizing, suggesting that music is a base human need, just like this noble savage! The film spends more time with patients as it goes on, but we’re never far away from iPod advertisements, the overdramatic narrator and superfluous authorities like Oliver Sacks and Bobby McFerrin. There are vivid, heartbreaking lives within Alive Inside, but the filmmakers constructed a near-fatal documentary framework around them.