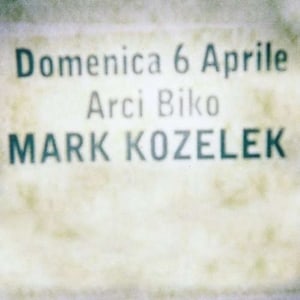 “Are you tired of these middle-aged ramblings of mine?”

For better or worse, Mark Kozelek’s description of his recent work is spot on, even more so for Live at Biko. Biko is a venue in Milan where Kozelek spent a night weaving his way through more of his recent output. He’s 47 now, and plays the part of the cranky, but hilarious, songwriter well. He’s evolved from his Red House Painters days into the funnier side of the indie-dad-rock world, more biting, more caustic than the National or Wilco. “If you’re a guy, and you ask when my record’s coming out on vinyl, I’ll kick the shit out of you. If you’re a girl, I’ll talk to you for an hour about it,” he smirks between songs, just before he pulls out the monumentally sad “I Watched the Film The Song Remains the Same.” That’s the duality of Kozelek in a nutshell: harshly sarcastic one moment, heartbreakingly depressing the next.

Kozelek has put out plenty of live albums and this is likely to be one of the most successful by simply riding off the coattails of the excellent Benji. That album has been considered his best since Sun Kil Moon’s debut with Ghosts of the Great Highway. Oddly though, the cuts from Benji hold the only weak moments on Biko. “I Love My Dad” is heartfelt but hokey, just like the album version. Kozelek’s wails on “Dogs” fall off beat too often, and a similar fate befalls “Micheline.” It’s possible that a good portion of Benji is hard to translate live. It’s Sun Kil Moon’s most rambling album, even by his wordy standards. “Carissa” is the middle ground as it sounds like a carbon copy of the studio version, but that’s not a detraction, as “Carissa” is one of Kozelek’s most gorgeous songs. “I Watched the Film…” might surpass the original with Kozelek’s finger picking creating a warmer feel, and “Richard Ramirez Died Today of Natural Causes” takes on a more intimate and less terrifying light.

The songs that truly shine are the non-Benji tracks. “Gustavo” floats along at a beautiful pace as Kozelek remembers an illegal immigrant whom he befriended before the man was deported. It’s an emotionally decimating song and serves as a perfect opener as Kozelek wades into regret as he sings. It’s the perfect opener. Old favorite “Alesund” has mesmerizing classical guitar work in the wordless intro; Kozelek just lets the strings do the talking. He quotes his favorite movie, Papillon, late in the set; his cry of “Hey, you bastards, I’m still here” is one of rebellion and defeat. The closing four tracks melt into each other to create an emotionally trying finale. Kozelek never skimps on potency, but even for him the final quartet is deeply moving. “Ceiling Gazing” is the quietest moment and serves as the most unguarded song. Kozelek sighs over the death of his old friend and drummer Tim Mooney, who passed away at 53. Kozelek then reveals “At the age of 46, I’m still one fucked up little kid,” scared, upset and scrambling to make sense of death. Yes, some of Biko is made of middle-aged ramblings, but they all become universal.