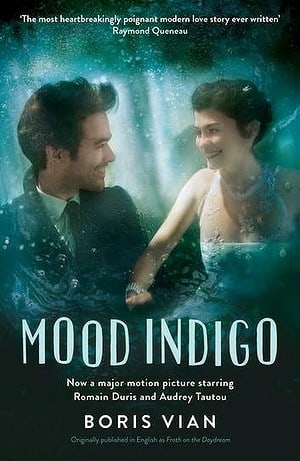 Michel Gondry’s style needs no introduction at this point and Mood Indigo provides none. Instead, we jump headfirst into a world with a bizarre version of the fates featuring typewriters, mice-men, re-animated papier-mâché food and a walking spider-doorbell. Yet another surreal world created by Gondry is the setting for a bittersweet boy-meets-girl story with a bleak ending. But without any grounding in reality, there is little room left to establish this fantasy world’s rules. Gondry’s ever-present ruminations on human emotion presented with childlike sensibilities are on full display. Yet the unfettered whimsy of Mood Indigo’s visuals is overwhelming, leaving the impression that Gondry favors art direction above exposition, writing and character development.

The film opens with a dizzying sequence that introduces rich, self-employed inventor Colin (Romain Duris). Gondry wastes no time establishing his premise. Colin’s world consists of bringing his wild ideas to life (like his “pianocktail,” a piano that mixes cocktails according to the music played) and lounging about his flat with chef/friend/lawyer Nicolas (Omar Sy) and Chick (Gad Elmaleh), an obsessive collector of Jean Sol-Patre (get it?) ephemera. When Nicolas and Chick begin to forge lives outside Colin’s fantasy walls and find girlfriends, Colin decides he must meet a girl “exactly like a Duke Ellington tune.” So he meets Chloe (Audrey Tautou) at a party and the two do the “biglemoi” dance with clown-like elongated limbs, soar through the Paris skyline in a cloud shaped bubble and get engaged at an ice rink. But on their wedding night, a snowflake takes root in Chloe’s lung and a water lily begins to grow until she becomes deathly ill and bedridden, surrounded by flowers as her hapless doctor (Michel Gondry himself) prescribes. The extreme cost of curing Chloe’s illness soon forces Colin to drastically change his carefree lifestyle.

Gondry and co-screenwriter Luc Bossi adapted Mood Indigo from Boris Vian’s 1947 novel L’écume des Jours. Vian infused his fairy tale with whimsy and nihilism, and it’s clear why Gondry saw the novel as a template on which he could let his style run rampant. There are endless opportunities for Gondry and production designer Stephane Rozenbaum to fashion kitchen monsters and parasitic lilies with stop-motion and CGI. But the constant desire to populate the screen with new and curious inventions – mostly limited to Colin’s apartment – distracts from the characters’ emotional upheaval. Gondry’s whimsy complements emotion exactly once. After Colin and Chloe’s wedding, the two blissfully float through azure water to a glass limo. The rest is the result of boundless imagination set free on a surreal story, but pure whimsy cannot sustain an entire film when it refuses to properly explore the repercussions of Chloe’s illness.

The extent to which Gondry confronts the gloomy end to this love story is limited to the film’s color palette. Chloe and Colin’s relationship becomes more and more distant as her illness drives them apart; or rather Chloe pushes Colin away to soften the impending emotional blow her death will have on him. In an instant, the once euphoric colors are supplanted by moody greys that wash out the screen. All the joy of the film’s first half is gone. And those artistic choices are to be expected. The fault with Gondry’s execution, however, is the nagging feeling that these choices in art direction and production design are the sole dictators of emotion in the film. Gondry uses visuals to convey an emotional impact that his actors do not convey, and the film stalls, unsure how to maintain whimsy in the face of a depressing story. Once Gondry sucks the color out of this world, all that’s left is to watch the flowers wilt and wait for the end, which Gondry drags out far too long.

And certainly the plan all along is to force Colin into living his worst nightmare: being a working man whose creativity is squashed by long hours and emotional duress. The second half pits Colin against rising medical bills. We see him lie on piles of muck in some inexplicable job and push all his friends away so as not to have them see his desperation. In the face of this crushing reality, the film’s early euphoric whimsy is rendered fantastical. But this section’s extreme focus on Colin reveals a key flaw: the other characters – sketchily drawn as they all are – only serve Colin’s emotional development. Colin himself is poorly developed by Gondry/Bossi and Duris, who cannot move beyond the fact that Colin is a fairly clichéd man-child who fell into love because one day the fancy struck him. The unhappy result of his impromptu search for a life partner and its gloomy end has little emotional connection with the audience.

Mood Indigo is undeniably a Gondry film, and it sticks to all of his hallmarks: emotionally naïve characters, evocative visuals and anti-romantic examinations of human emotion. But compared to previous successes like Eternal Sunshine of the Spotless Mind and The Science of Sleep, this film fails to create sympathetic characters.