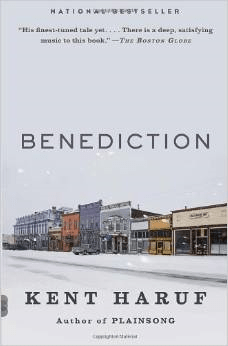 [xrr rating=4.5/5]Kent Haruf is a national treasure. His previous novels Plainsong and Eventide are spare, powerful stories of loss and perseverance set in the small town of Holt, CO, and focus on an array of hard-luck characters who rarely give in to despair, though it constantly beckons from just around the corner: two unmarried brothers working a cattle ranch, a man with an estranged wife and his two confused boys, a pregnant high school student. Through careful observation and pitch-perfect phrasing, Haruf transforms their stark realities into something uniquely moving –deft explorations of a uniquely American loneliness, and the communal ties necessary to rescue ourselves from it.

Now comes Benediction, another slice of Americana that is set in the same town but in the present day, perhaps a generation later than the previous books. Characters from those books are referred to only elliptically, while a new set of protagonists falls under the gaze of the measured, third-person narrator. In some ways the logical successor to the earlier novels, Benediction is different as well in that its focus is sharper, with a smaller cast of characters and a single, overriding narrative thrust.

That thrust is provided courtesy of Dad Lewis, an aging merchant and pillar of the town, now suffering from late-stage cancer and settling in to the final weeks of his life. Tended by his wife Mary and daughter Lorraine, Dad is haunted by the absence of an estranged son and a decades-old act of principle that resulted in tragedy. There are a couple of neighboring women in the mix as well, a young girl next door, and a newly-arrived preacher and his family, but that’s about it.

In the course of the novel, these characters will interact and intertwine, as the reader learns brief but evocative snippets of each one’s backstory. There is also, perhaps, the single most powerful sermon I’ve ever come across in a novel, one that will drive many readers to tears, either of fury or joy, depending on one’s political inclinations. (For me, it was joy.) This sermon turns out to have crucial consequences for any number of characters.

Through it all, Haruf’s narrator maintains a placid, even serene tone, reporting events with little commentary, even when they are painful or steeped in a kind of creeping dread. It is an effect that Hemingway would have recognized and appreciated, but it carries far more heart than Hemingway ever expressed: “She stayed at the Holt County Memorial Hospital at the south end of Main Street for most of three days. They could find nothing wrong with her except that she was old and she was working too hard and she had exhausted herself by taking care of her husband by herself.” Later, a bedridden Dad Lewis reflects, “He didn’t like anyone seeing him asleep unless it was his wife or his daughter, and he didn’t want even them to sit and wait for him to wake up.”

Such brief snippets as these might appear to carry an air of detachment, but if anything the opposite is true: we feel so close to the characters that we, like them, hold their pain at arm’s length. It’s a kind of detachment that is predicated upon an extreme attachment, if that makes any sense.

The best way to understand Haruf’s extraordinary storytelling ability is to read his books, and this one is a good place to start, as it tells a story somewhat more self-contained than his earlier works. Surprising to the end, though, Haruf eschews the predictable denouement and easy “redemption” (my God, how I hate that word) sought by nearly every other novelist in America these days. Like all good art, Benediction avoids the predictable. Like all great art, it gifts us something else instead: the truth.