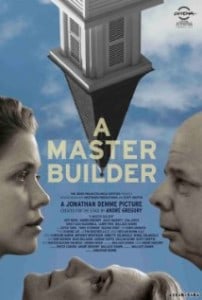 [xrr rating=3.5/5]A dark and dreary day turns to golden sunlight and smiles when the beautiful Hilde Wangel (Lisa Joyce) arrives unannounced at the home of Halvard Solness (Wallace Shawn) in Jonathan Demme’s stage-to-screen outing A Master Builder. Shawn adapted the Henrik Ibsen play The Master Builder himself and, along with frequent collaborator Andre Gregory, staged this adaptation in several private rehearsals over the course of 15 years before bringing it to the big screen. The result is a compelling and fully enjoyable outing, though missing much of what makes Ibsen’s tightly textured prose so delightful.

Halvard Solness is not a well man. Tended to by nurses round the clock and hooked up to machines that parcel out his life in slow beeps, he wakes only to start meddling with the few people in his life who seem willing to put up with it. After turning down a commission to design a family home, his former mentor Knut Brovik (Andre Gregory) arrives, equally ill, begging Halvard to allow his son Ragnar (Jeff Biehl) to take the commission instead. Knut wants only to see his son succeed on his own before he dies, but Halvard won’t allow it. In fact, unbeknownst to Knut, Halvard keeps Ragnar’s fiancee Kaia (Emily Cass McDonnell) around as a secretary by faking a romance with her, knowing if she stays with him, Ragnar will, too. Halvard’s brittle, angular wife Aline (Julie Hagerty) is similarly manipulated, though he seems to hold at least some affection for her.

After a brief spell, Halvard appears revived, but before we can even register the healthy pink glow that has come to his cheeks, Hilde Wangel arrives, breathless. Long blonde hair bouncing in all directions, with a loud laugh and tight white short-shorts, she’s both angelic and awkward, and she’s come to see the man who made promises to her as a child, and to talk to him about what he did to her when she was 12.

Halvard is clearly going through the motions of coming to terms with his past in order to accept his present, but there is a notable lack of urgency in his demeanor. There are moments of impatience, certainly, the demands and irritations of an overstuffed artist compensating for his insecurity. It’s the emotion that’s missing, a very odd thing indeed, considering one of Shawn’s most obvious diversions from Ibsen’s original: Hilde’s age. In Ibsen, she was 14 when she first met Solness, but here, she was 12, and one can only speculate on the reasons for this change.

This particular adaptation is not without appeal, though it is at turns clever and frustrating. Halvard’s illness makes for a solid framing device, and there are some subtle, lovely cinematographic changes between the opening scenes and Halvard’s miraculous rejuvenation. And Halvard is a man who has made a lot of deals with a lot of devils, both real and imagined, so often that he himself is now essentially a devil that others hope to make deals with. Yet the spectre of this illness, including his repeated worries of suffering from some unspecified mental condition, hangs over the film, making Solness almost completely uninvolved in his own fate, a narrative choice that saps the energy from the film.

Without question, the film’s saving grace is the performances. Larry Pine as Dr. Herdal brings his trademark easy charm, while Lisa Joyce turns in an astounding, intense performance as a girl with undefined motives. Gregory is nuanced and pitch-perfect in his small role, and Hagerty, in a character that borders on one-dimensional for most of the film, is truly heartbreaking in a late scene. The cadence and tone of the dialogue — of which there is plenty — is so smooth it’s practically liquiform, and when punctuated with bursts of Hilde’s laughter, it’s an absolute pleasure to observe.

Shawn is miscast as the Master Builder, certainly, but his delivery brings out the dark comedy hidden in the nooks and crannies of the script. Despite the implications of Halvard’s character, he’s a man prone to endearing (though slight) lapses of humanity. It’s a chance for Wallace Shawn to be the Wallace Shawn everyone wants him to be, but these charming moments are too often unconnected to the action around him. A half-finished sentence here, a startling revelation there, things that in Ibsen’s play reflected Halvard’s many attempts to come to terms with his preternatural good luck are, in A Master Builder, narrative dead ends. Halvard is a character with substance caught in an insubstantial film.