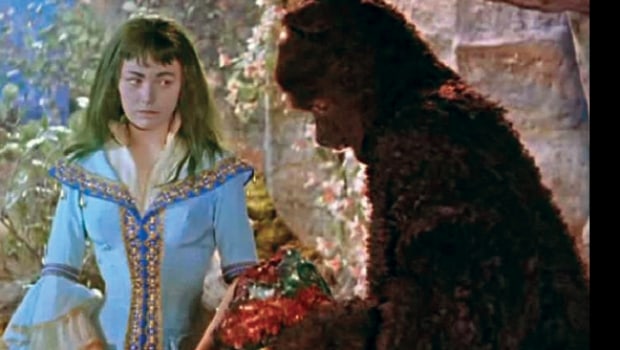 There’s a fine line between childlike fantasy and psychedelic visions. From Alice’s Adventures in Wonderland to “The Teletubbies,” children’s entertainment has been full of worlds that defy imagination, evoking childlike wonder in the young and unsettling the young at heart. Imagination fills our inner lives with a richness than can be enchanting and unsettling in the same light. It is this tension that fuels the anxiety of fairy tales, whose stories of happily ever after play on acute childhood fears of abandonment, incompetence and powerlessness. These fears can be couched in superficially benign packages like Bambi, whose separation anxiety is tempered by all the cute. But you wonder what childhood traumas were caused by something like The Singing Ringing Tree (Das Singende, Klingende Bäumchen).

The East German film industry was a prolific entertainment-propaganda machine, the state-owned film studio DEFA producing some 900 films between 1946 and 1992. But most of these films did not enter the moviegoing consciousness the way their West German counterparts did. One notable and unlikely exception was a 1957 film that was aired on BBC in 1964. The Singing Ringing Tree was stripped of its highly saturated colors and converted into black and white and serialized with an English narrator. The film left such an impression on British children of the era that in 2002, BBC 4 broadcast a documentary program that cheekily called the film’s BBC broadcast “one of the great traumas of postwar childhood.”

The DEFA Film Library, based out of the University of Massachusetts at Amherst, has produced restored DVDs of this and other East German Märchenfilm, returning such films to the kind of colors that enchanted and terrified children of all ages. The Singing Ringing Tree begins with the prince resting from a horseback journey on a very artificial soundstage, with eye-popping colors and an ominous sun that, although faceless, seems to anticipate the gurgling demon baby sun that watches over Teletubbyland. 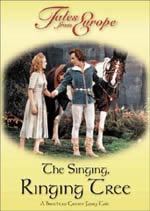 The film’s sets and costumes look like a marriage of German expressionism and Thomas Kinkade. Humorist David Sedaris has noted that the German language sounds so harsh that even the most benign statement comes off sounding like “an actual order, like, ‘Cut the cake and lie facedown in that ditch between the cobbler and the little girl’.” A generation of British schoolchildren heard this percussive language behind a soothing BBC narrator.

The movie’s plot is typical fairy tale fodder. Loosely based on the Brothers Grimm’s “The Singing, Springing Lark,” the movie follows a handsome prince who longs to marry his kingdom’s beautiful Aryan princess. The princess is cold and entitled (an indictment of capitalism?) and turns down the prince’s offer of a box of pearls, haughtily letting the gems spill out of the box in a loaded metaphor for something children could not possibly have understood. What she really wants is the legendary “singing, ringing tree.” The intrepid suitor tracks down this arboreal treasure under the control of a malicious dwarf who promises the prince can have the tree, but with a catch or two.

As the prince approaches the dwarf’s lair, an eerie, high-pitched soundtrack shifting to guttural organ sounds in a low register that probably sent literal shivers through anyone under the age of five who stumbled upon this fantastical tale. The prince uses his sword to clear cobwebs from the lair, leading to a clearing and an orchestral fanfare, the soundtrack’s series of musical cues a case study in musical neurosis.

The dwarf rules the kingdom, and when he hears the prince’s plea for the titular tree, the dwarf holds out his hand, and the tree materializes in it, one of not a few heavily phallic images in the film. The prince seals his own fate, so confident that the princess would fall in love with him that he asserts that he’d be happy to turn into a bear if things didn’t turn out as planned.

You can guess what happens to the prince. At sunset he turns into a bear, albeit a bear that looks like a man covered in bees, but the princess too is transformed, her finely pancaked looks transformed to ghoulish makeup that would not look out of place at Hot Topic.

There are sites where you can read more about the film’s subsequent deranged visions (I haven’t even gotten to the giant fish), but I wouldn’t want to spoil the whole movie for anyone curious about this relic from behind the Iron Curtain. Years from now, will there be a program dedicated to adults who experienced childhood trauma after enduring the psychedelic vision of the Teletubbies and the horrifying baby sun under which they plied their psychedelic whimsy?