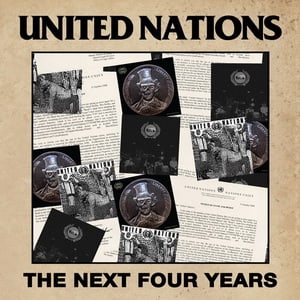 [xrr rating=2.0/5]The Next Four Years has a pretty good gimmick: it tells the story of a developing hardcore band, from its first grimy tape to a late-career dalliance in post-rock experimentation. Frontman Geoff Rickly, formerly of Thursday, has described United Nations as a sort of conceptual joke, and he leads a crew of faceless and mostly anonymous contributors to this end. Unfortunately, for an album this flat and boring, gimmick is about all it can offer.

The problems begin with the sound. The recording has a headache-inducing, compressed-to-shit quality that buries the whole mix inside itself, to the point where nothing in particular can be made out. I can already hear the reply: but if this is indeed beginning with a basement tape, aren’t these songs supposed to sound like it? The trouble is these songs lack dynamism, wit or melody across the board. “Serious Business” is all unintelligible crunch and broken-PA vocals, and hey, “Revolutions at Varying Speeds” and “Between Two Mirrors” are as well, only the first rips off “Phantom of the Opera” in its final bars. Guitars are brickwalled but curiously thin and never have anything interesting to do. With so little interplay between them, The Next Four Years makes UN’s position as a joke sideband exceedingly clear.

Rickly gives by far the most noteworthy performance here, providing the only moments my ears didn’t tune out on each listen. His distorted scream has far more presence than either of the guitars (not to mention the nonexistent bass), and on occasion he ditches it for talk-singing or even clear melody, leaving the listener with just about the only thing to hold onto. He builds a choir on “United Nations vs. United Nations” and ends “Between Two Mirrors” spinning off into a fade. Best, he closes the album by calling out and answering himself on “Music for Changing Parties,” over a rapidly dissolving drum pattern, eventually reminiscent of the industrial thrum of Killing Joke. The rest of the record struggles to keep up with him.

Again, isn’t that the point? By creating a fake mythology for a fake band, doesn’t the band have to go through the paces to develop that band’s, well, development? Unfortunately, that snarky allegiance to genre constraints plays the same as actual allegiance and in this context sounds twice as dull. The Next Four Years is a record as inept in purpose as it is in execution, and all the cleverness of those involved can’t do much to change this.