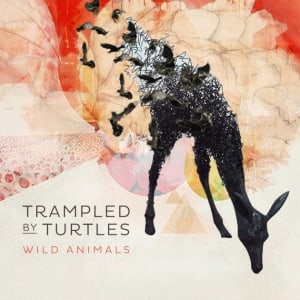 [xrr rating=3.0/5]Duluth, Minnesota progressive bluegrass band Trampled by Turtles are known for their raucous, fast-paced shows. Lightning-speed fiddle solos and frenetic banjo playing are on display as the band plays hyper-kinetic live versions of its jammy tunes. Songs like “Wait So Long” and “It’s a War” from their 2010 masterpiece Palomino have been known to work audiences into a frenzy. The band’s name seems apt, as the risk of getting trampled at a TbT show is actually a reasonable fear, albeit a somewhat unconventional one for a bluegrass band.

The act has another side apart from its badass bluegrass jam-band aesthetic, though. There is a softer, gentler element of Trampled by Turtles’ music, one that is starkly on display on the group’s seventh studio album Wild Animals. It’s not until “Come Back Home,” a tune found at the record’s halfway point, that the group’s familiar frenetic virtuosity comes to the fore. Most of the album consists of quiet, contemplative folk songs. Unfortunately, when stacked against the barn burners the band has dished out in the past, these ballads are kind of snoozers.

There is nothing wrong, of course, with a band changing directions musically or trying to embrace a side of themselves that they have not explored before. The problem with Wild Animals is that lead singer Dave Simonett’s songwriting chops aren’t quite up to snuff enough to carry a whole record through mid-tempo and slow tracks. Simonett’s vocals are sensitive and resonant, and the boys in the band do a decent job providing backing vocals. But, the melodies aren’t especially memorable and the lyrics traffic in clichés more than creative thought. The title of the waltz “Repetition” is too descriptive of its own musical content. The title track is too similar to “Repetition” in groove and spirit to create much interest. Even the slightly peppier “Are You behind the Shining Star?” is built upon a predictable, repetitive melody and generic emo lyrics (“Are you behind the shining star/ Am I as hopeless as you are?”).

Wild Animals is a record on which the musical goodies are backloaded. The last three tracks are the album’s saving grace. “Western World,” a concise, up-tempo bluegrass number with a rock ‘n’ roll edge and a punk spirit, is in the vein of the band’s best past work. It will sit naturally next to “Wait So Long” and “It’s a War” during live shows. It tells an intriguing story too, with the refrain consisting of the enigmatic “We tried to remember the Western world.” Then, the band gives us a vivacious traditional-sounding folk tune called “Nobody Knows” that features a rustic mandolin sound a driving backbeat. It wouldn’t be out of place on Wilco and Billy Bragg’s Mermaid Avenue projects.

Trampled by Turtles at least succeeds at giving a positive last impression. Closing track “Winners” is a simple ballad, but it feels more natural and heartfelt than most of the record’s other tunes. Simonett leaves us with a reflection on youth that looks to the past with existential melancholy (“Most of us survived”) and a knack for narrative detail (“Dirty little basements and electric guitar”). It’s risky to set aside hot bluegrass licks for contemplative lyrics and melodies. Even though Wild Animals doesn’t fully succeed, Simonett and company deserve respect for trying something different. They have proven they can write three good songs; now they just have to write a whole album’s worth.