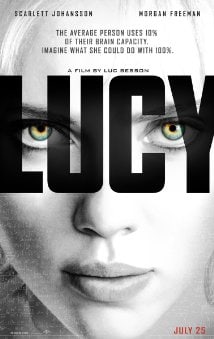 [xrr rating=1.25/5]Filled with Nic Roeg-esque montages and a finale that repurposes Terrence Malick’s The Tree of Life as some sort of metaphysical chase sequence, Luc Besson’s Lucy certainly attempts to add more visual flavor to its trim 90 minutes than most blockbusters can achieve at twice its length. But what should be a refreshing dip into trash-art instead plays out as an incoherent, tonally inconsistent chore that, among other things, plays on regressive Asian stereotypes to fuel its suspense.

The film gets underway when the eponymous protagonist (Scarlett Johansson) is forced to bring a mysterious package to the violent Jang (Choi Min-sik), who promptly has her seized and turns her into an unwitting mule for the briefcase’s contents, an experimental new drug that Jang’s minions implant in her intestine. When the bag ruptures, however, the leaking drug enters Lucy’s bloodstream and unlocks access to her higher brain function, and a thriller about a trapped woman becomes something altogether stranger.

It is a waste of time to carp about the film’s unrealistic adherence to the “we only use 10% of our brain” myth. About the only thing the film has going for it is its complete disregard for prevailing attitudes of realism or grit in American blockbuster filmmaking, with its highly chromatic frames and unabashed silliness. But it does fit within the tradition of laboriously over-explaining a plot it does not even believe in, with Johansson’s increasingly, deliberately inert line readings dully explaining secrets of higher knowledge to go along with a classic round of pseudoscience from Morgan Freeman’s Professor Norman. (Is it any wonder, at this point, that Freeman considers acting to be more of a function enabling art than art itself? I struggle to think of the last time he was not in a movie that either made light of his age or called upon his gravitas to lend severity to ludicrous bullshit.)

It’s also distressing that the film pits a superintelligent white woman against, primarily, a group of savage Korean mobsters, whose single-minded, vengeful pursuit seems increasingly barbaric as Lucy transcends such piddling inconveniences as feelings or concern. And though she often resorts to non-lethal means to subdue her pursuers (thus leaving them alive to still drive the plot), she has no qualms murdering a few innocent bystanders, including a patient undergoing an operation because he was terminal anyway. Johansson has had a surprising streak of roles like this, as alienated creatures who either mimic humanity (the A.I. of Her, the extraterrestrial of Under the Skin or, now, transcend it, but the initial thrill of seeing her play this part with ease—a femme fatale cock of the head and part of the legs to lure a gullible captor, intentionally stripping her voice of even the slightest emotion—fades when it is put in service to a scattershot action film.

There’s still something compelling about the character, though. Lucy may be the ideal heroine of this post-human phase of blockbuster engineering. As she gains increasing control of her brain, she seems to become one of the film’s CG programmers, capable of seeing her diegetic world for what it is: a series of ones and zeroes that she can manipulate at will. Access to higher brain function strips her of empathy, and her casual disregard for bystanders—”No one ever really dies,” she flatly informs a horrified French cop (Amr Waked)—could read as a comment on the heartlessness of even designated superheroes in today’s movies, in which the Avengers, Superman and others allow thousands of lives to be lost in every urban skirmish. At one point, Lucy even seems to express awareness of gender-flipped action tropes, keeping the aforementioned cop around, despite his uselessness, for an unspecified memory, hinted to be simply the presence of a sexual other, which no longer interests her but amusingly casts the male cop in the role that so many women have in action movies, to be a hindrance but eye candy enough to be dragged along for the ride.

It’s an intriguing line of thought, but one that is rendered pointless in this ideas-movie that lacks any suggestive, concrete ideas. Its non-science informs the finale, in which Lucy trips out to the history of the universe as she turns herself into a supercomputer (time your acid drop to kick in at about the 78-minute mark, kids), but even the whiz-bang effects of time reversing across eons feels like padding for a point that never comes. Besson edited the film, and he’s a capable action cutter, but that also makes his use of such abstract imagery, as well as his use of thuddingly symbolic insert shots of animals living out the food chain, depressingly functional rather than evocative. The style befits the mindset of its protagonist: capable of seeing awe-inspiring sights, yet beyond the point of caring about them at all.