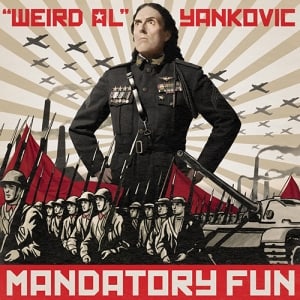 [xrr rating=4.0/5]“Weird Al” Yankovic is the most successful entertainer of the modern era. Don’t argue with me. For over 30 years, Yankovic has skewered pop songs with such flair and gusto that his versions often surpass the originals. His following ranges from pre-teens to baby boomers, and when I saw him live last summer, at least three different generations of fans rapped along to “Amish Paradise.” It takes a rare breed to whip up that much fan dedication, and there is no sign of him slowing down. Mandatory Fun is one of the best records of his career, and if it is true that this will be his last full length project, there wouldn’t be a better way to go out.

Mandatory Fun has a golden share of what Yankovic does best, parodies so good they may well outlast their inspiration. Opener “Handy” sends up Iggy Azalea and Charlie XCX’s “Fancy,” and while he did not need to try hard to improve upon that piece of pop ordure, Yankovic is too dedicated to make a half-baked track. Yankovic the singer sounds surprisingly good on the chorus. Between his fake interviews and amazing videos, it’s easy to forget that the man is a talented musician in his own right. That fact is further cemented by the winking “Mission Statement,” one part love letter to Crosby, Stills & Nash and one part middle finger to the record labels that get in the way of his parody targets.

Yankovic’s band may well be the most underpriced guys in the music biz, but damn are they on point. The Pixies tribute “First World Problems” condenses Doolittle into three minutes, with a Steve Jay bass line that feels like the creepier brother of “Debaser” and scratching guitar from Jim West that recalls to brings to mind “Hey” or “Gigantic.” With Kim Deal fired and Frank Black growing distance from rock ‘n’ roll, “First World Problems” is the best Pixies song in years. Yankovic and company even get Amanda Palmer to sing the title as he rages against Wi-Fi that won’t reach his kitchen. “My Own Eyes” nails the Foo Fighters’ aesthetic and has some of Yankovic’s most surreal lyrics since “Everything You Know is Wrong” (“My guinea pig committed hara-kiri/So we used him to play hacky-sack).” Fingers crossed that the Foos eventually preform it.

The now ubiquitous “Word Crimes” taught me more about grammar then my entire high school career did. Side note: let’s just pretend that “Blurred Lines” never existed and “Word Crimes” is a great parody of Marvin Gaye. Ok? Good. Mandatory Fun isn’t just educational, it’s also genuinely funny. “Inactive” turns the Imagine Dragons’ anthem into an ode to apathy and Doritos, an alt-rock version of Yankovic’s “Couch Potato.” The parodist observes that “My NordicTrack’s collecting dust/And my Stairmaster’s a pile of rust” as he rests in a pile of “Cheeto dust.” “Foil” starts as classic Food Album material before it turns into a massive conspiracy: “And soon you’ve got black helicopters comin’ cross the border/Puppet masters for the New World Order,” he sings to the bouncing beat of Lorde’s “Royals.” Maybe it’s my own terrible memories of Texas high school football, but the false bravado and cries of “WE’RE GREAT AND YOU SUCK” followed by “Ok full disclosure we’re that great” struck close to home. Even the ambitious nine minute Cat Stevens parody “Jackson Park Express” works flawlessly. The mandatory polka melody “Now That’s What I Call Polka” is his best in that genre since “Angry White Boy Polka.” (Admit it, you’ve always wanted polka versions of “Wrecking Ball” and “Thrift Shop.”) The best part? Yankovic turns the ending of “Best Song Ever” into guttural noises and wacky sound effects.

My only complaints are with the mediocre “Lame Claim to Fame” (turns out there is such a thing as too much cowbell) and with the album’s brief length. I need more “Weird Al” and, let’s face it; we all need more “Weird Al.” We need him to remind us of how silly, but awesome, pop music is. Even if he calls us tacky while he’s doing it.