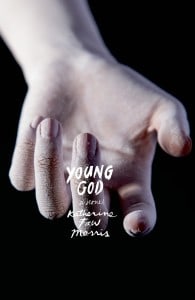 [xrr rating=3.0/5]There are many brutish and vile things about Young God, made all the coarser by how Katherine Faw Morris chooses to convey them, in a clipped, stripped prose that sits out in the open, unflinching. Her debut novel, Morris opens the book with a woman falling off a cliff and ends it with a brick of black tar heroin and a dead body in a trailer, with much of note but little of interest in between. You feel a bit sick on the last page but empty and a little angry about being duped into reaching there. It’s horrid, yes; brutal, sure; but why can’t there be a point to it?

To her credit, Morris pulls no punches and delivers every brutal act in plain, obvious detail as clear as a snapshot and vivid as a fever. Her images are indelible: warm white goo tastes a little salty and mostly like nothing; a woman falls off a cliff and her face is a hole; a teenager shoots heroin and careens through the dark. These images, as opposed to the narrative, give off insight and experience, from the cold and chemical smell of cocaine to disposing of a body in garbage bags. The bare style, simple sentences, barely longer than a line or two, most sections taking up only a fraction of a page, stress the importance of now when consuming Young God, a sort of pale cousin to the enlightenment-by-experience of Far Tortuga, but with a fraction of the insight.
This is partially thanks to the novel’s shaky structure, which favors shock value over development and the obvious over the implicit. At the very least Morris doesn’t seem to believe the basic premise of her book to be scandalous or somehow subversive: 13-year-old Nikki, heir to a North Carolina drug fortune, moves in and out of dark rooms and shakedowns, robberies and prostituting with her father, Coy Hawkins. They slash a pimp’s face with a knife, rob drug dealers, smoke crack, and during each moment Morris’s bluster-less prose sells it. There is a sense that Nikki is of these places, and belongs to them.

But there is no plot to sell, no arc, nothing outside the explicit experiences Morris documents. Nikki can be standoffish but outside of that quality she reads as flat, without insight, detail, motivation. Dream sequences provide small fears, abstracted into grotesques, but even these seem weightless, pointless. Other characters, from her crackhead father to various prostitutes and family members, feel like the barest sketches of people. Moment-to-moment, they don’t need to be, and the plot certainly doesn’t require it either, but once one takes a step back, this one-dimensionality is revealed, Young God as thin as the paper on which it is printed. Apparently Morris chiseled a 100,000 word manuscript down to the published book’s 20,000, and thank God she did; what reads as decent now would have been interminable at that length.

It is not that Young God can’t leave a mark; when I finished, my stomach was a little upended and throughout I grimaced internally and externally. A book that merits a physical reaction clearly hits some kind of target. Unfortunately, the impressions are purely reactive, without being the slightest bit intellectual. Writing this review I strained to recall plot details, or memorable scenes, or moments of insight, because there were none. Only faint stains, ugliness, crudity. Not that Morris needs to justify her brutish and on occasion pleasing book – art for art’s sake and all that jazz – but rather Young God fails to justify itself. Her style is miraculous, a revelation, but one can’t help but feel it has better books within it and greater ideas to convey than Young God.