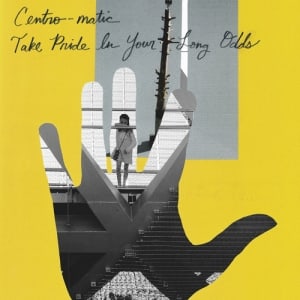 [xrr rating=3.0/5]Without attaining much success, Centro-matic has been in the game for close to two decades, first as a solo project for frontman Will Johnson and later as a grungy rock group. This longevity is key to the band’s charm, as Johnson and company long ago abandoned commercial pretenses, instead regrouping every few years to turn out increasingly anachronistic slabs of alt-country, powered by muscular grooves and Johnson’s wavering sandpaper voice. Take Pride In Your Long Odds succeeds and fails for the reasons listed above, alternately energized and dulled by a lack of expectations.

In its best moments, Pride taps into a freedom and excitement often lacking in music of this kind. The title track opens up the album with a sort of overture, open-strummed acoustic guitars building over ponderous drums. The track’s dynamics feel natural, nothing contrived or pushed, as if the song were being written spontaneously for the listener with each listen. “Hey There, Straps” comes off like a half of a song, without verse or bridge, but is endlessly replayable for this fact, attaining some platonic ideal of melody and sticking to it. Rockers like “Every Mission” and “Cross Path” strut with a powerful shine, drums bursting and rolling over mean riffs that manage to jangle. Johnson’s weather-beaten croak imbues it all with an exquisite sadness and is in fact the band’s most transcendent element, wringing melancholy from simple melodies and shifts in tone, even the happiest songs bearing the grit-rough rasp of a life hard lived.

Unfortunately, this approach lives and dies with the quality of each riff, and they are not all up to the task. Lead single “Salty Disciple” rides a disco beat to no particular end, crunching the guitar between layers of fuzz but stamping out all individuality therein, giving the listener no melody to hang onto The gallop of “Cynthia Glass” can’t quite make up for its dull chorus and lack of development. Others pick up a good idea but don’t carry it much of anywhere, half-songs that sound like a shrug or a concession rather than a statement.

Perhaps what Pride needs is a little more development. With no record label and no professional obligations but to themselves and a small but fervent fanbase, Centro-matic had had little reason not to keep these songs in incubation. Pride isn’t a bad album; in fact, it can be very good when it desires, but frequently it desires very little, accepting the minimum from each song without a particular drive to make something more out of them. Here, Centro-matic sounds like a band with nothing to prove.