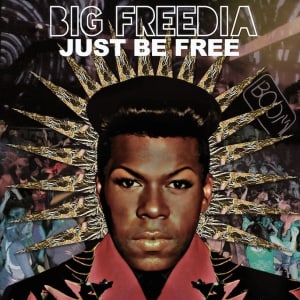 [xrr rating=3.25/5]Few live musical exploits compare to the energy of Big Freedia and her crew bouncing around the floor. In a festival, club or rock hall, Freedia gets booties bouncing from the drop. Freedia has built indie cred via affiliations with Check Yo Ponytail and record labels like Fool’s Gold and Mad Decent, and her New Orleans bounce has flourished during the trap/twerk dance floor renaissance. When sweaty bodies surround you, it’s hard not to participate. The challenge of a dance music artist is to capture those vibes in the studio. With the assistance of producer Thomas McElroy (Madonna, En Vogue), Freedia mostly succeeds with her new album Just Be Free, satisfying her urges to keep the floor debauched.

Like most other dance music sub-genres, New Orleans bounce is built on a signature foundation. About a third of Just Be Free, including “Where My Queens At,” “Lift Dat Leg Up” and “Explode,” could have been pulled from any set during Freedia’s 15-year career. For the un-initiated, bounce sounds like Southern hip-hop shouted through Styrofoam and processed through a rusty bicycle spoke at 180 rpm. More often than not, the lyrics are simply orders for the gyrating masses. Like sweet and spicy Mexican candy, the pairing might be initially displeasing, but in the right environment it’s addictive.

Much of Freedia’s proven formula remains, with McElroy offering insights and techniques to make the record stand out from the experimental pop sphere. If Britney Spears and Freedia were ever in the same room – and Spears had auto-tune available – “Dangerous” would be a great collaboration, Freedia dominating the track with Spears handling the sensual “Dangerous” whispers.

Just Be Free highlights Freedia’s roots in Jamaican dancehall more than her previous album, Big Freedia Hitz Vol. 1. “N.O. Bounce” commences with a beat ripped right from a Jamaican mobile sound system, and follow-up track “Jump on It” also leans to that aesthetic. The album’s exploration of new sounds and aural experimentation are a perfect mash-up of dancehall and dub-reggae’s underlying principles. The album closes with its most eclectic production, “Mo Azz.” The track has all the lyrics you expect from Freedia (“I see ass everywhere”), and the track shares as much with ghost-house and EDM-tinted trap as it does with Freedia’s signature flow.

It took over a decade for Freedia to really start capturing revelers outside of her regional base. Even though this release is more refined than her previous work, she is not abandoning her edge just to make a buck. No matter the size of the audience, as long as Freedia is able to move that booty and shake across the stage, it’s hard to imagine her doing anything else.