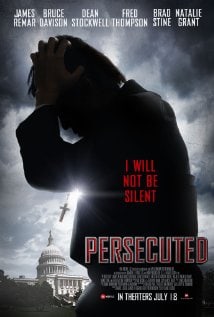 [xrr rating=1.0/5]No one political party or ideology holds a monopoly on government conspiracies, which is why the plot for Persecuted, at least on the surface, holds a fair amount of promise: corrupt Senator Donald Harrison (Bruce Davison) wants to use an influential celebrity televangelist John Luther (James Remar) to help him sell the public on a dubious new law. This law is called the Faith and Fairness Act, meant to encourage religious equality and tolerance, and we soon realize that it’s not that Harrison has a nefarious purpose for supporting the Faith and Fairness Act, it’s that the Act itself is the nefarious purpose.

In fact, Harrison is so desperate to get the Act passed that, when Luther refuses to help, Harrison has a young woman murdered by a shadowy government agent (Raoul Trujillo) so Luther can be framed for the crime. Luther finds himself on the run, a lone Christian abandoned in the wilderness, out to fight against multiculturalism and a deeply-entrenched, government-sanctioned liberal atheist cabal whose sole purpose is to take the United States away from the Christians.

Persecuted, unsurprisingly, features a script cribbed straight from the more conspiracy-minded pundits of the religious right, with catchphrases and snippets of political commentary outweighing original text at a nearly two-to-one ratio. This is not laziness, however, but more of an entrance exam: if you’ve heard this dialogue before, that means you’re the kind of person Persecuted was made for. Unfortunately, the film thinks very little of its audience, feeding them the same punditry they get every day from television, dressing it up as fiction and making it pretty with plenty of visual tropes ripped straight off the small screen. But that’s the whole point of Persecuted: to provide comfortable, well-worn conspiracy stories for the American religious right.

Political propaganda alone is not enough to dismiss a film outright; movies such as Casablanca (1942) and On the Waterfront (1954) achieved an artistic vision despite (or perhaps even because of) their political aims. But Persecuted is no nuanced work of art. It’s a sloppy affair, so slapdash it loses track of entire groups of characters in the middle of a scene, and so confused it can’t even remain philosophically consistent within its own self-imposed boundaries. In lieu of realism, the film stunt casts an actual anchor as a news anchor and a Christian comedian as a Christian comedian; in lieu of attempting any hardcore cred of its own, it just steals the iconic gun and rosary imagery from Boondock Saints (1999), hoping no one will notice.

Persecuted, unable to tease a solid performance out of a single actor, digs deep into the B-movie bag of tricks in an effort to legitimize itself, and fails. There’s the Bernard Hermann sound-alike soundtrack, intended to give the film gravitas but only managing to half-distract the audience when the script trips over itself. It brings in Dean Stockwell, gives him high billing and a couple of lines of dialogue to try to class up the joint; he doesn’t.

As difficult as it is to believe, Persecuted truly does mean to be a cautionary tale of what could happen were rampant tolerance to take over America. It’s not just non-Christians who bear the brunt of Persecuted’s ire, but capitalists, too, plus the media and anyone even tangentially associated with the government. It’s a world of stark blacks and heavenly whites, where everyone is evil except the Christians who must take up arms and fight against an oppression the film can’t be bothered to clearly define. Persecuted is a flaccid persecution fantasy, hastily thrown together and without a shred of respect for the very audience it courts.