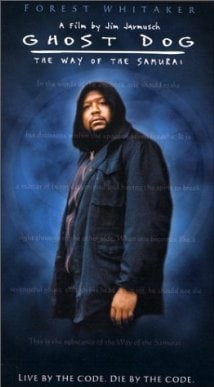 Jim Jarmusch is a director at once detached and strictly controlling. He makes philosophical, or at least heavily thoughtful, films about people who don’t even come close to fitting into society, and ostensibly he does it in a cool non-style that lets his films flow easily rather than dazzle. But he has tight control over his frames and the rhythms of his stories, more so than the vast majority of filmmakers. He makes movies about lost souls and he’s not afraid to keep them lost, but he has a keen ability, through his directorial assurance, to give lost-ness its own kind of direction.

Ghost Dog: The Way of the Samurai centers on an urban black man (a brilliant turn by Forest Whitaker) in modern New York City, a man who lives as close to the life of an ancient Japanese warrior as he can. He has found a way to acquire a master who will pay him to kill, in the form of a low-level mobster (John Tormey), and who is perplexed by Ghost Dog’s methods but amazed by the efficiency with which he executes the mob’s undesirables. He seems to shun everything but reading, training and completing missions. He insists on being paid for a year’s worth of work on one day only: the first day of autumn. He keeps pigeons and uses them as carriers to communicate with the mob. Sometimes the birds act as his spiritual guides.

Jarmusch adds other flavors to this strange tale. The movie has the rhythm of a Ghostface Killah concept album. Almost literally, in fact, because the soundtrack is all hip-hop beats with an original score by RZA, who’s produced much of Ghostface’s work. Ghost Dog loves hip-hop, and though it’s never made specific, it seems too great of a coincidence not to connect Jarmusch’s hip-hop samurai with the Wu-Tang Clan’s fascination with martial arts movies. Although it adds many other elements into its bizarre mix, Ghost Dog can be read as the live-action Wu-Tang album, one that they’ve never been able to make themselves.

But Jarmusch is fascinated by much more than hip-hop. Another major element is cartoons. He intercuts old ones—black-and-white Steamboat Willie-style and Betty Boop cartoons—with much of the action of the film. When Ghost Dog sneaks underneath an enemy’s house and dispatches him by firing up through the water pipes, killing the man through the drain of his bathroom sink, Jarmusch cuts in footage of this tactic through animation, the only medium in which it would work. The gangsters are also frequently shown watching cartoons, usually transfixed by them to the point that they let down their guard. Is this Jarmusch making a “Sopranos”-esque comment on the decline of the mob in modern media-soaked America, or is it just that he can’t resist creating a world in which Mafiosos are done in by the very cartoons that baffle them?

This is a film about Western obsession with Asian culture, and about hip-hop, and the mob, and ornithology, and animation—Jarmusch uses all of these aspects to ponder the possibility of a truly ascetic modern lifestyle, but it’s also frequently very violent. During Ghost Dog’s intermittent killing rampages, the director seems to be making a statement on Quentin Tarantino-style uber-hip movie violence. I’m still fascinated by Jarmusch’s fearless mixing of pop cultural styles and wavelengths. I’ll probably always watch Ghost Dog wondering whether the director sees any greater connection between these elements other than how they all challenge him to spin them together into one narrative and still make it feel unmistakably like a Jarmusch film.