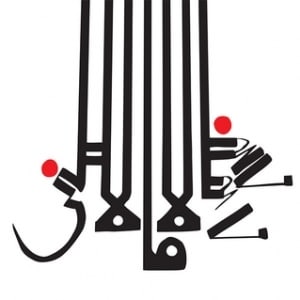 [xrr rating=4.25/5]The call for hip-hop to be more “mature” and less materialistic is a simplistic argument fraught with classist and racist landmines. Aside from the polemical nature of the framing, this perspective simply throws too many great songs out the window. But the sheer unclassifiable strangeness of a group like Shabazz Palaces has the power to stop that line of thought in its tracks. When confronted with music this far out, impeccably produced and totally unlike the mainstream, how many of those nominally demanding something like this are prepared to appreciate it?

When Black Up dropped in 2011, it consolidated the sounds of Ishmael Butler and Tendai Maraire’s first two EPs and yet still sounded like something had suddenly appeared in Earth’s orbit from nowhere. Comparisons, when they could be made at all, ventured outside of hip-hop sphere to find loose links to the minimal but soulful electronic programming of James Blake, the deconstructionism of Captain Beefheart and the space-is-the-place unclassifiability of Sun Ra. About the only constant of the album was its unpredictability, a trait that is only magnified in their follow-up, Lese Majesty. Superficially organized around a series of seven suites, the 18-track album quickly makes it apparent that this loose grouping is nothing more than a feint to give listeners a false sense of comfort.

Lese Majesty sheds the overlong naming conventions of Black Up’s song titles but retains their confounding phrasing. Suites such as “The Phasing Shift” and “Palace War Council Meeting” sound more obscure than the most insular prog rock, and individual song names like “Colluding Oligarchs” and “Harem Aria” only deepen the feeling that the duo cribbed their titles from ‘70s space rock CDs. But the inscrutable labels match the music itself, which differs from track to track but is unified by Maraire’s burbling production and Butler’s buried, cryptic lyrics.

Opener “Dawn in Luxor” sets the general tone for the album, with a soundscape that recalls ocean depths as much as the vacuum of space. Butler’s wafting vocals could equally pass for drowned or sucked into nothingness. When lyrics coalesce into recognizable fragments, however, they contain striking imagery and references. Combined with that aquatic-interstellar production, a nod to the ancient African civilization of Kush adds a mythological element that provides a new point of comparison for Shabazz Palaces: Drexciya, the Detroit techno outfit. That band is named for and built around a self-made mythos of an Atlantean ocean colony of the descendants of slaves thrown overboard in transatlantic shipments. And this is the track that eases you into the album! Nothing about Lese Majesty is easy, and the loose collections of vaguely themed material gives everything a fragmentary feel, transmissions arduously reaching Earth’s surface from either above or below.

That’s not to say that the record lacks engaging, even borderline pop moments. “They Come in Gold” unfolds with rolling flow and a beat that occasionally lurches like a mild dip on a roller coaster, just enough of a sudden drop to cause your stomach to float without leaving it at the top of a 100-foot drop. “#CAKE” rides its hook into the album’s most accessible moment, and the song is further buoyed by an extended list of cities that works as evergreen pandering. The production is what really sells it, though, with a beat that moves without warning between rolling snares, staccato bar percussion and whiplash-inducing stops, all held together by a rubbery bass line that snaps back to zero after each stretch.

Still, if it’s not exactly clear what the songs have to do with each other, it’s obvious that this works best as a single, flowing and ever-changing document. The sum total of Lese Majesty not only proves Shabazz Palaces are the most interesting and aesthetically progressive rap duo since OutKast, but that they have inherited the Afrofuturist mantle dropped by that group after “Hey Ya!” at once promised a new era of musical exploration and set the bar too high for anyone to meet it. Former movers and rump-shakers like Prince long ago settled into roles as elder statesmen, and even someone like the eminently talented Janelle Monáe can ultimately sound more of the past than the future. Shabazz Palaces are prophets, tied to numerous styles and artists that came before, but they add up those influences into something nearly unprecedented. Lese Majesty already has people poring over its lyrics, but that forest-for-the-trees thinking ignores what an invigorating, provoking work the entire package is. Shabazz Palaces give an insight into where music can go from this point, regardless of whether anyone else, or even the duo themselves, can live up to this vision.