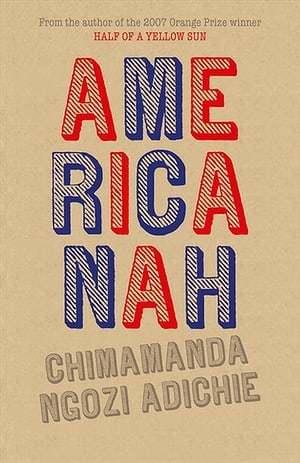 [xrr rating=4.25/5]A typical soccer mom with blonde hair waited in front of me at the Whole Foods. Checking her out was a young, African-American woman in her early twenties. The soccer mom chatted up the cashier, never flinching when it was time to pay her exorbitant food bill.

“Thanks, Chelsea,” the woman said as she left.

“Actually, it’s Cheylea,” the check-out woman said, even though it was plainly written on her name tag.

This interaction would have been perfect fodder for Chimamanda Ngozi Adichie and her new novel Americanah, a discourse on race in the United States hidden inside a love story. The Nigerian-born Adichie, who lives in the United States, possesses an acute point of view that an African-American born here may not own. Over the course of the nearly 500-page novel, we gain a deeper understanding of what it means to be black, not only in the United States, but in London and in a homogeneous Nigeria where Adichie’s protagonist, Ifemelu, never considered herself black. This distinction becomes abundantly clear to her once she relocates to the United States.

Unlike blacks in America who are descended from slaves, Ifemelu and the other Nigerians who come here in Americanah don’t have that stain on their heritage. While the grandparents of many modern African-Americans were the victim of Jim Crow discrimination, Ifemelu’s “American-African” ancestors received a top-notch education at a British school in Nigeria. Although Adichie is highly critical of the discrimination that still exists in the United States, she handles herself and her reproach with calm, assured clarity.

According to Adichie, discrimination is still alive and well in the United States, and people who claim they “don’t see race” are full of shit. She also points out that the socio-economics vs. race argument is pure bunk. Though she doesn’t mention it in her book, Joe Biden’s “clean and articulate” assessment of Barack Obama is a perfect example of how segregation proliferates through language. Who would call a white person “clean” and “articulate?” Ifemelu soon learns all these nuances as she navigates what it means to be black in the United States.

Meanwhile, Ifemelu’s former boyfriend, Obinze, has dreams of making it to America but cannot earn a visa due to strict laws following 9/11. While Ifemelu thrives in the States, Obinze toils in London with false papers, pining for his lover and the country that won’t accept him.

Soon after Ifemelu arrives in the United States, she suffers a traumatic experience and cuts off contact with Obinze. Confused and soon deported from London, Obinze finds a way to become rich in Nigeria and marries another woman. Ifemelu has a series of boyfriends, from a rich and handsome white man to a buttoned-up, black academic, but she is soon restless to return to Nigeria.

Though story is secondary to Adichie’s agenda, she wraps a page-turning tale around her thesis. Ifemelu leaves Nigeria and arrives penniless in the United States where she endures the vexing travails of a fresh immigrant. Mirroring much of Adichie’s own life, Ifemelu earns her way towards a Princeton fellowship by starting a popular blog on race with the unwieldy title, “Raceteenth or Various Observations About American Blacks (Those Formerly Known as Negroes) by a Non-American Black.” Adichie intersperses blog posts throughout the narrative, meditations on race that sometimes punctuate the story but often feel shoe-horned in, as if Adichie wanted to write a collection of essays on her observations on the United States but was then coerced to craft a novel.

Adichie doesn’t let her home country off the hook, and she excoriates Nigeria just as much as the United States in Americanah. She believes that Nigerians are too in love with other cultures with a goal to shed what makes them unique. The Nigerian elite talk much like the elite in the United States and London, as a cultural imperialism has begun to settle on Lagos. At the same time, Americanah isn’t a paean to traditional Nigerian values. Adichie captures a world in flux and has no problem dispensing judgment without the sting of nostalgia. Despite the occasionally jarring blog posts, this is a big, incisive and compassionate book that should make us pause and think about realities we often take for granted.