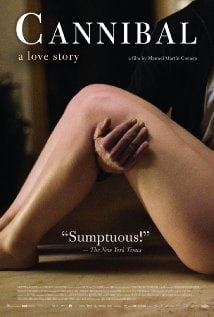 [xrr rating=3.0/5]At first blush, you’d think that Hannibal Lecter and Cannibal’s Carlos would have much to discuss over a macabre dinner. After all, both have a taste for the finer things, along with a penchant for drinking red wine while they savor forbidden meat. Yet you’ll find none of Dr. Lecter’s prying questions and mind games in Carlos (Antonio de la Torre), who mostly keeps to himself as he runs a one-man tailor shop in the small Spanish city of Granada. His bloodlust and perversity are kept hidden behind the flattest of affects and steeliest of gazes. His movements are precise. His flat is minimalist (nothing like the squalid home of Jame Gumb, The Silence of the Lambs’ other psychopath and a far grislier tailor). In fact, of his cinematic forbears, Carlos perhaps shares the most similarities to Norman Bates: polite, professional and placid on the surface, but someone with mommy issues who kills the women who evoke his lust.

The opening sequence of the film is about as deep into Carlos’ psyche as director Manuel Martín Cuenca will allow the viewer to go. From Carlos’ POV, we watch from a great distance the mundane goings-on of a brightly lit fuel station in the dead of night. A young couple gets back into their car and hits the road, and from our viewpoint, the audience achieves a sense of participation in the steady pursuit. Eventually, Carlos runs the other car off the road and collects what he’s after: the beautiful female passenger who had caught his eye. He takes her to his remote mountain shack, where he carefully lays her out on a countertop with built-in blood gutters and commences to cleave her to pieces.

The meat from Carlos’ conquests—a surprising amount from the waifs he selects as his prey—is carefully wrapped and stacked in a refrigerator that contains nothing else. Each evening, he sits at his dinner table with his glass of wine and consumes the flesh deliberately and without reaction, the act more in line with an austere ritual than a perverse joy. By day, he tends to his craft, carefully taking the fabrics he’ll fashion into expensive pinstriped suits and gently laying them out onto his work table, sliding the scissors across the material as precisely as he works his cleaver through flesh.

When he’s not working or hunting, Carlos enjoys watching. He frequently stares out his window, the viewer left as clueless to the handsome serial killer’s internal machinations as are Carlos’ own neighbors. But one new tenant in his building does catch on, and she’s not afraid to watch him back. In fact the blonde, flirtatious Alexandra (Olimpia Melinte) manages to worm her way into his apartment, attempting to befriend him or perhaps something more. When she unsurprisingly goes missing soon after, her more level-headed twin Nina (also Melinte) shows up in hopes of finding her troubled sister, mostly because Alexandra owes her money.

From there, the central conceit of Cannibal is laid bare. Carlos becomes smitten by Nina, albeit through an unyieldingly staid demeanor. The main tension of the film lies in just how far their growing affinity for each other will go, especially when he suggests they take a trip together to that remote cabin of his up above the timberline. De la Torre is striking in his restrained portrayal of Carlos. His performance compels the viewer to desire more insight into what lies below his still waters. The problem is that Cuenca never allows his film to delve deeply enough to even touch upon Carlos’ humanity. He’s not a monster, and he’s not a sympathetic character who does monstrous things; instead, he’s largely an automaton.

Cuenca’s film is beautifully shot. With many distant views, vivid colors, shots down long corridors or angled through windows, Cannibal is a feast for the eyes. The largely bloodless treatment of the violence makes the film no less chilling. But one can’t help but wish there was a bit more insight into the cause for Carlos’ deviance. He admits to eating the women he desires, yet Nina proves he’s capable of at least rudimentary love. He’s a sociopath with a soft spot, but we never learn how he’s come to possess either trait. Though the film is a visual pleasure, Cuenca seems to want to create a portrait of a man who is soulless but not completely without heart. That’s a difficult plan to execute, and more often than not Cannibal comes off as a film that wants to have its flank steak and eat it too.