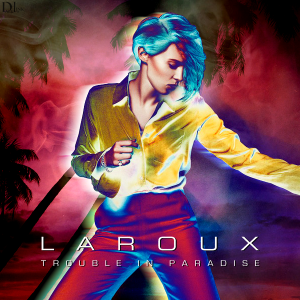 [xrr rating=4.5/5]It’s been five years since La Roux’s self-titled debut album. To most, that’s a lifetime in pop music. Delay after delay – most significantly because frontwoman Elly Jackson temporarily lost her falsetto – pushed back a much-awaited sophomore album to the point that, once announced, no one knew what to expect. 2009’s La Roux was all synth-pop fueled by electronic beats, courtesy of then-producer/co-writer Ben Langmaid, reminiscent of ‘80s British synth legends. On Trouble in Paradise, La Roux is still heavily influenced by ‘80s pop but has expanded that pastiche of genres to include ‘70s disco-synth and a little funk. Fortunately, Jackson’s vocals are as striking as ever, and that is the real surprise on Trouble in Paradise. For all the obstacles Jackson overcame to finally record and release this album, the result is nine single-worthy tracks of pure pop brilliance.

The major shift between albums has been the departure of Langmaid. Jackson then went through several failed collaborations before finally settling in with Ian Sherwin at the production helm on this project. And the sonic shift can be heard even beyond the incorporation of funk guitar and disco dance beats. The tracks themselves have shrugged off the rigidity of the previous album in favor of a more free-flowing fluidity. Fast-paced and lively, this electro-disco with a tinge of the tropical is incredibly dynamic. And La Roux, despite her hurdles, comes across as more confident than ever before.

Opener and first single “Uptight Downtown” immediately establishes an unmistakable theme: this is a breakup album, but rather than overtly melancholic it comes across as buoyant and carefree. The killer chorus is catchy, but it’s the funky guitar riff that makes the song stand out. Along with “Kiss and Not Tell” and “Cruel Sexuality,” these tracks form an enviable breakout first third of the album. The latter is deceptive, building at first from a restrained beginning to a smooth, melancholic finish with Jackson’s layered vocals echoing into the fade out. “Kiss and Not Tell” is a cheeky offering dominated by playfully jaunty synthesizers. This trio is so firmly entrenched in their synth-pop and funk roots that they immediately sound like old favorites, and that can only bode well for La Roux.

After this blistering start, La Roux settles into a slower ballad with “Paradise Is You.” The song itself is a little lackluster in comparison to the rest of the album, especially lyrically, but it provides a much-needed break. Jackson and Sherwin seem to be acutely aware of the necessity of breaking up the album into digestible sections. As upbeat as the album is, “Paradise Is You” and later, “Let Me Down Gently,” allow listeners to process the groovier songs. The atmospheric ballad “Let Me Down Gently” was interestingly the first teaser from Trouble in Paradise, despite being a one-off in La Roux’s oeuvre. Emotionally hard-hitting yet noticeably fragile, Jackson’s vocals balance resilience and heartache until the track takes off with a soaring saxophone solo.

Top heavy, though, Trouble in Paradise is not. “Silent Partner” may be the song most in line with the previous tracks on La Roux. The arrangement itself is much more electronic, and Jackson’s vocals resume that stiff delivery reminiscent of “Bulletproof.” The likes of “Sexotheque” and “Tropical Chancer” round out the second half of the album. “Tropical Chancer” continues the funk-troppo trend. Once again, jangly guitars come to the forefront, and where it comes up short lyrically, it makes up with its looping arrangement. Similar to “Kiss and Not Tell,” the ridiculously titled “Sexotheque” features an incredibly catchy synth riff juxtaposed against a story of commitment versus promiscuity. If you can get past the title, the song is one of the best on the album.

Minor quibbles aside, Trouble in Paradise is a sleek, stellar pop offering. Clocking in at 42 minutes, the album breezes by but leaves an clear impression. Not only do the songs embrace their ‘70s and ‘80s stylings, they pack an emotional punch. If their exteriors are lithe and upbeat, that belies their core melancholy which provides the meat for repeat listenings.