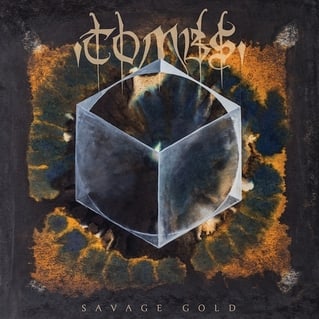 [xrr rating=2.5/5]Metal gets a bit ridiculous with its subgenres. Pagan black metal, sludge metal, viking metal, there’s apparently one called war metal—the list goes on and on. Admittedly, some of these subgenres have come into their own; sludge metal, for instance, has been killing it this year. But what happens when the music hides behinds the shield of the genre? Tombs’ newest album has been billed as atmospheric sludge metal, but, despite that interesting billing, it’s really just a straightforward metal release, and a tame one at that.

The Brooklyn four-piece is a relatively new player, their debut came out in 2009. Lately, they’ve been turning heads with some of the tracks released before third album, Savage Gold, was on public display. The gritty “Edge of Darkness” gained polite acclaim thanks to its crunchy guitar lead and an inhuman performance from drummer Andrew Hernandez. The track’s opening attack turns to simmering verses that built up a frenzied energy just before Hernandez launches back into his blast beats. It’s a good, but not stunning, show of power, but even then Savage Gold doesn’t deliver on the promise of “Edge of Darkness.”

Much of the blame can rest on the guitar work of Mike Hill and Garett Bussanick. To put it bluntly, it’s all so predictable. If you can’t tell exactly where the lead line of “Seance” is going, you probably haven’t been listening to metal for that long. On the slower tracks like “Echoes” or “Deathtripper,” the guitars move half-heartedly, like they were just woken from a nap. The guitar work is such an important part of Tombs’ sound, it’s mixed right to the front, but there’s not much that acts to engage. Hill also serves as the vocalist, and his work is a mixed bag. There are a few fist pump-worthy screams, but Hill delves into bleary-eyed territory that comes off as awkward, especially on “Echoes.” Add in lazy backgrounds, and long bridges made of Hill’s musings turn yawn-inducing.

If Tombs has one serious strength, it’s the rhythm section. Hernandez is a monster on a majority of Savage Gold, his blast beats and mind-boggling footwork are easily the album’s most thrilling moments. Opener “Thanatos” has a jaw-dropping double kick drum intro from Hernandez and the following track, “Portraits,” sees Hernandez working slightly off tempo, his toms bouncing in strange ways before he returns for another brutal round of blast beats. Bassist Ben Brand has flawless chemistry with Hernandez, creating a skull-crushing low end. Brand gets some golden licks in during the quieter moments as well, pulling off intricate and speedy solos.

Savage Gold comes infuriatingly close to being good. Hernandez and Brand are exceptional, and it’s clear that Hill and Bussanick have chops. The main problem becomes predictability, between great songs like “Edge of Darkness,” “Thanatos” and the monstrous closing track “Spiral” are a collection of tunes that don’t need the label of Atmospheric Sludge Metal; they deserve the label of predictable metal.