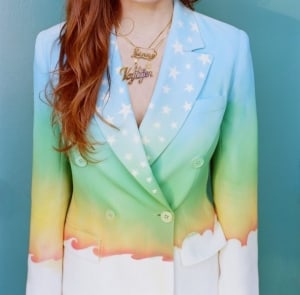 On “Late Bloomer,” a standout track from Las Vegas native Jenny Lewis’ third solo album, The Voyager, the singer-songwriter asks the listener to “forgive my candor.” This can apply to the entire record, filled with emotional confessions and colorful portraits of a turbulent inner life. Lewis is refreshingly and at times painfully direct with her lyrics, whether she is talking about the death of an estranged father, awkward teenage sexual experimentation, jealousy and rage-filled relationships, the psychophysical effects of insomnia or a Hawaiian getaway gone horribly wrong. At her best, Lewis channels classic country artists like Loretta Lynn or Patsy Cline who communicated painful truths about the human condition with straightforward, minimal lines.

Lewis is steeped in Americana and folk music (not just with Rilo Kiley but on her first solo record, a collaboration with the Watson Twins), but The Voyager sparkles with studio polish. While it’s easy to imagine songs like “The New You” or the title track performed with just vocal and acoustic guitar, Lewis and producer Ryan Adams channel the Southern California Fleetwood Mac Rumours sound for much of the record. “Head Underwater” features tight studio background vocals and hollow electric guitars. “She’s Not Me” is almost danceable with its slow-jam disco groove. The result is a collection of songs in which the raw lyrics often stand in ironic juxtaposition to the sparkling production values. Lewis could have made a straightforward folk record, but instead she cranked out a far more interesting, complex pop album.

Lewis makes something universal out of personal tragedies universal. On “Head Underwater,” she laments “I never thought I would be here/ Looking out on my life as if there was no there there,” a sentiment with which any number of disaffected thirtysomethings might nod their heads in agreement. “Just One of the Guys,” a washed-out, reverbed tune guest produced credit by Beck, traffics in gender politics without invoking Judith Butler or Simone de Beauvoir. Lewis addresses what society expects of women, woefully singing, “I’m just another lady without a baby” and “I’m not gonna pay for you/ That’s not what ladies do.” Sometimes the singer’s directness goes overboard and skirts cliché (“All those times we were making love/ Never thought we’d be breaking up,” she sings on “She’s Not Me”). But the songs’ emotional transformation from beginning to end keeps them fresh and relevant. On “Aloha & the Three Johns,” for instance, the songwriter begins by asking, “Is this the end of our relationship?” and ends with the even more alarming question, “Is this the end of civilization?”

While Lewis’ songwriting chops are better than ever, the artist’s real strength still lies in her voice. Her lyrics work because she delivers them with such clarity and conviction. Lewis’ instrument encompasses the subtle twang of Dolly Parton, the confidence of Neko Case and the pop sensibility of Linda Ronstadt. No matter how dark her lyrics get, her voice communicates such human joy that it’s impossible to dwell on the sad state of affairs she describes. And she proves to be far from a nihilist. The album ends with the assertion that “The voyager is in every boy and girl.” One of the first lyrics on the album is “There’s a little bit of magic/ Everybody has it.” Of all her projects, The Voyager is the record that best shows off the magic within Jenny Lewis.