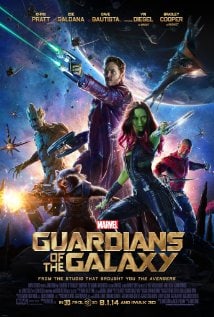 [xrr rating=4.0/5]I am no Marvel fan-boy. The allegiances of blue and green aliens and humans may well be complex political allegory based on sophisticated concepts of warfare, or it may just be really cool. Whatever their value as comic fiction, that kind of summer blockbuster minutiae leaves me cold. But Guardians of the Galaxy is different, a better movie when it’s not forced to be a Marvel movie, which is more often than you’d think. This late-summer product immediately establishes an emotional level lacking even in relatively human Marvel products like the Captain America and Iron Man series. I’m not a sucker for displays of superpowers and the conflicted ordinary humans who possess them (though if they ever give Mark Ruffalo a Hulk movie, I’ll be there). But I am a sucker for movies about loss and nostalgia, and that’s what this movie feeds on from frame one.

It’s 1988. Eight-year old Peter Quill is in the waiting room at the hospital where his mother is dying of cancer. Peter is listening to a Walkman, which marks him right away as a pop culture kid of a particular era that resonates with me. Director James Gunn sets the tone of his superhero blockbuster not with an homage to George Lucas, but with a tribute to 80s tear-jerkers like Terms of Endearment. That movie reached its climax with a dying mother and a young son who didn’t want to touch her. This one begins with that trauma, one which resonates through the entire movie.

Peter declines to take his dying mother’s hand, and like that she’s gone. The scene is lit like an ’80s film, in the patina of a recent past that’s familiar yet alarmingly far away. Young Peter wanders into the night unable to cope with this loss, and suddenly he’s taken by a massive spacecraft. After that intro, you can’t help but root for this kid.

We meet the adult Peter (Chris Pratt) 26 years after the death of his mother, sympathetic even if he’s a douchey bro, his bro-ness a defense mechanism, a mask like the helmet he wears in space (the vulnerability of being open) that keeps him from having to get close to people despite various amorous conquests. Peter is an outlaw wandering the barren landscape of an abandoned planet with a flashlight that produces holograms of the planet’s past. As he sees projected traces of a thriving civilization, Redbone’s “Come and Get Your Love” plays on the soundtrack. 70s pop music can be a too-easy signifier of coolness or camp, but this soundtrack resonates as more than nostalgia: these songs are an irreverent hero’s inner monologue of loneliness, love and loss, and escape. Pratt typically plays smart-alecky characters, and Peter Quill is no exception. Surprisingly, this franchise role gives him more room to stretch his acting chops, as in this opening sequence wherein he establishes character without any dialogue, his goofy slacker carriage and facial expressions conveying his resignation to a bleak, hostile landscape. This is a lost kid, dealing with the decay of the world in the only way he can, by cracking jokes, but hanging on to something from his past so valuable that he would risk his life to save it: music.

In the logic of the film, Peter Quill was picked to guard the galaxy, and this too resonates with his mother’s death. Every intergalactic battle seems like a fight against disease, every battleship a defense of a failing body, the steel mesh netting of fighter ships in unison, the regenerative powers of Groot, all giving comic book voice to the horrors of a terminal diagnosis. Quill can guard the galaxy, he and his rag-tag friends can make sacrifices, but could he save his mother from death?

Of course you’ll have questions: did musical technology between 1988 and the present-future of Guardians really stop at the Walkman? On one level, the movie tells us what happens to Peter after his mother’s death, when he (arguably) grows up. But I like to think of his space abduction as a metaphor for a life turned upside down by grief, trapped in a state of emotional development that was arrested at the moment of his mother’s death, a time when his psyche had taken in all his cultural knowledge up to that time, from his peers and from the mix-tapes his mother made him and the pop culture she certainly passed on to him. Guardians of the Galaxy plays like the movie Peter made from his mother’s mix tapes, every track a seemingly obvious pop staple but resonating on multiple levels. In the hospital, he’s listening to 10cc’s “I’m Not In Love,” the song’s resistance to romance (“That doesn’t mean you mean that much to me”) mirroring the boy’s fear of showing his mother how much he loves her just as she’s about to disappear. The movie establishes its hero’s vulnerability from the start. Its trailer plays like a winking satire, and the film does pay homage to many sources, but with the help of its soundtrack it strikes a perfect tone of melancholy more than parody. Even if it doesn’t convey the vulnerability of the universe, it conveys that of its hero. That Guardians of the Galaxy conveys human vulnerability so well, in the package of a multi-billion dollar franchise entertainment, makes it an uncharacteristically mature movie. With things blowing up, in the galaxy and in the heart.