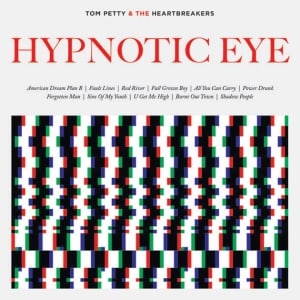 [xrr rating=3.25/5]When it comes to true blue Americana, Tom Petty and the Heartbreakers have carved out a spot somewhere below apple pie and baseball and just above good girls who love Jesus. Music journalists may overuse the term “ageless,” but even cynics would have a hard time arguing that with Petty, the shoe fits. While their sound has progressed and explored new territory from one album to the next, there is always comfort in a new Tom Petty record. His voice has not been shredded raw over the years like Dylan’s, and he’s not as outspokenly partisan as Springsteen. What’s true of Petty’s output is what used to be true of American industry: a steady stream of durable products made here at home.

It’s fitting that Hypnotic Eye, Petty’s 13th studio album, opens with a lead single called “American Dream Plan B.” Without pontificating, Petty snarls along with a crunchy guitar groove about how the future isn’t nearly as bright today as it was just a generation ago. The way he sings about mama and papa and fighting for his dream makes you almost forget that these words are pouring forth from a man old enough to collect Social Security. Hypnotic Eye has been billed as a return to the Heartbreakers’ roots, specifically their first two records, which already cemented their place as a ventricle of heartland rock. The new album is frontloaded with songs that follow through on that promise, even if the momentum stalls the further you go.

The band’s first album since 2010 is one they have been tinkering with for three years. Hypnotic Eye revisits familiar Petty themes, most notably the allure of bewitching young women. In “Red River” he sings of a woman somewhere between superstition and Santería, whining lines like “She shakes a snake above her hair/ Talks in tongues when there’s no one there” and “She’s got a rosary and a rabbit’s foot/ A black cat bone that keeps her good.” The raconteur’s approach has always made Petty’s songwriting so vivid and compelling, and Hypnotic Eye has material as good as nearly anything else in his four-decade career. His heartland cred may be called into question by all the time he spends in Florida and Los Angeles, but on songs like the hard-driving “Power Drunk,” you can see that despite where he lives, this rock star’s popped-up collar is decidedly blue.

Elsewhere in the front half, “Fault Lines” adds a swinging tempo and sharp-edged riffs by lead guitarist Mike Cameron, who co-wrote the song with Petty. “All You Can Carry” continues Petty’s fixation with restlessness, imploring to listener to “Take what you can and leave the past behind” as on-the-run imagery soaks this jukebox romp to its core. But the backend of the album peters out. “Forgotten Man” opens with a jangly guitar riff that could easily be kissing cousins with “American Girl.” The plodding, island-infused “Sins of My Youth” doesn’t win points in the lyricism department (“All those things that were hidden away/ It’s so bad in the light of day”). “Burnt Out Town” taps into the blues from 2010’s Mojo but doesn’t bring much new to the table, and “Shadow People” is aimless and simply stretches on too long.

But even average Tom Petty and the Heartbreakers is still pretty good. Hypnotic Eye proves that the 63-year old rock icon and his romantically cruel cohorts (of whom the line-up has remained far more consistent than one would expect after nearly 40 years) are not slowing down. They may take their time between albums at this point, but that’s simply a hallmark of quality craftsmanship.