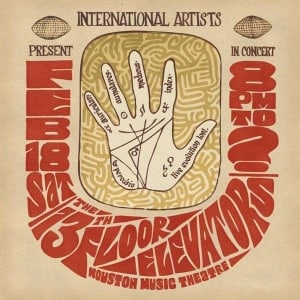 [xrr rating=3.0/5]Recorded when (most of the?) members of the 13th Floor Elevators endured the aftermath of acid stronger than they had anticipated, Live Evolution Lost was recorded at Houston Music Theatre on February 18, 1967 featuring the Austin, Texas, psychedelic quintet’s earlier songs. Electric jug-playing Tommy Hall, guitarist & vocalist Roky Erickson, guitarist Stacy Sutherland (who confessed later to a bad trip), bassist Benny Thurman and drummer John Ike Walton made it through a 90-minute set. Starting off with “(I’ve Got) Levitation,” Erickson’s voice sounds thin (as does the whole production, probably given the limitations of the tape and conditions). But Sutherland’s chunky chords and Hall’s electric jug, the signature addition which enriches this band’s eerie sound, manage to leap the distance between stage and listener. The audience here feels far away, perhaps on their own trips. Three more of their best songs follow. “Roller Coaster” and “Fire Engine” keep the speed up, while “Reverberation (Doubt),” as its parentheses hints, burrows into the darker side of dislocation, beneath the skin, as Erickson preaches an invitation to breach hesitation, to push one through to the other side. Hall’s jug skitters about and, again, Walton’s drums clang and clash under Sutherland’s searching riff. “Don’t Fall Down” drags and stumbles, frankly, despite its titular warning. For “Tried to Hide” the staggered approach works better. Its scattershot vocals suit the harmonica-driven mood, and this could fit in well with the band’s San Francisco counterparts. (Fans say that the Avalon Ballroom bootlegs are the best extant live impressions of this band; this Houston concert, however, was the one their International Artists label wished to officially set down for release; one assumes this tape was then lost.) After the frenetic tempo of many of their songs, the giddier but shaky “You’re Gonna Miss Me” displays the fragility of Erickson, over sometimes Byrdsian or Beatlesque progressions, well. Later songs on the first CD find the band more firmly backing the singer in a more blues-rock fashion. A rattling “She Lives (In a Time of Her Own)” scrambles and skids, closing the disc. This master tape may have some faults as the vocals skip and the fidelity on an admittedly dodgy recording seems more strained, but it’s a lively song. Its unsteady gait, whether from tape or band, nonetheless reveals the band’s determination to bash on. While these live versions may not equal their studio originals, nearly all from their self-titled 1966 debut LP, they will reward fans eager for more of this band, given their short career and few recordings.