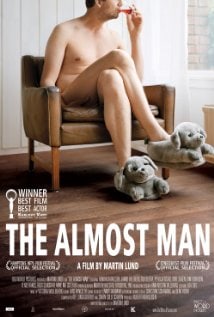 [xrr rating=2.5/5]The heyday of the cinematic man-child rolls on. While discussing the trend of today’s younger adults delaying marriage and mortgages has become rote, we’re routinely bombarded with cinematic characters who just don’t want to grow up. From the mumblecore of Jeff, Who Lives at Home to the zany comedy of Step Brothers, male characters in the throes of arrested development don’t seem to be going away anytime soon.

We can now add Norwegian film The Almost Man to the mix. Henrik (Henrik Rafaelsen) is in his mid-30s but you wouldn’t know it by the way he acts. He and his buddies flick boogers at each other and think nudity and snapped towels are rip-roaringly hilarious. His idea of intimacy with his girlfriend is roughhousing in a supermarket. When asked to try it, he realizes that he cannot even dance without irony. He toes the line between youthful exuberance and childishness. But despite his best efforts, Henrik’s life is becoming increasingly adult-oriented, as his obligations shift towards new employment at a stuffy office job and a new home with his recently knocked-up girlfriend, Tone (Janne Heltberg Haarseth).

The pressures to finally grow the hell up begin wearing on Henrik and he lashes out in the most immature ways. During a wine and cheese shindig thrown by Tone at their new home, Henrik climbs in a guest’s car and urinates down the cleft of an open children’s book for no reason whatsoever, only to be caught in the act by the soon-to-be mother of his child. He gets staggeringly drunk with old high school pals and makes out with random women, even going so far as to physically accost a complaining neighbor who also happens to be his new co-worker.

As her boyfriend’s actions become more and more inexplicable, Tone no longer finds humor in his childish antics. Even when he’s not trying to initiate sex while she’s laid up with morning sickness, there’s little indication he’s going to accept his newfound responsibilities and be a decent father to her unborn child. Meanwhile, Henrik does make half-hearted attempts to break away from his immature friends, but he usually ends up retreating to his mother’s home cooking for solace.

Director Martin Lund’s film makes no effort to touch upon universal conditions, focusing instead on one particular overgrown child who should have worked through his angst during his teenage years. That he’s not ready for the pressures of adult life is not unique in this day and age, but that doesn’t make his situation any more compelling. Instead, The Almost Man is a slight movie that’s made all the slighter by the fact that Henrik isn’t all that likable to begin with. After all, why should we care about a guy whose idea of a good time is pissing on a child’s book? Sure, there’s plenty of thirty-somethings who aren’t ready to become fathers (Henrik too often jokes that Tone should simply “flush it”), but nothing in The Almost Man speaks to a greater truth. The acting performances are strong enough to hold the viewer’s attention, but ultimately it’s hard to care about the outcome one way or another. The Almost Man is only almost interesting.