January 23, 2021
Home Books The People in the Trees: by Hanya Yanagihara 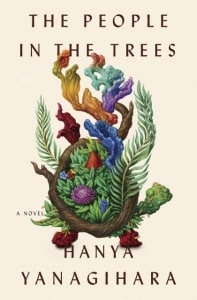 [xrr rating=2.25/5]Right up until the final two pages of The People in the Trees, it seemed like Hanya Yanagihara was writing a meditation on the banality of evil, with special emphasis on “banality.” The book drags through a description of a career that’s as accidental as it is thoughtlessly cruel. Then, those final paragraphs reveal her central character’s true monstrousness, but it’s hardly a satisfying conclusion. To be fair, it’s challenging to imagine a better ending, but that’s a reflection of the unsettling theme she chose. She takes her inspiration from the real-life story of Daniel Carleton Gajdusek, a Nobel Prize winning scientist who was later convicted of sexually molesting one of his adopted sons, with indications that it was not an isolated incident. Both Gajdusek and Yanagihara’s Norton Perina end up in far-flung corners of the world and make ground-breaking discoveries there. They each are recognized by the Nobel Committee and they both end up adopting a legion of children from the Third World. And just as Gajdusek was an unrepentant pedophile, Perina exhibits no remorse for his similar sins.

Yanagihara uses her character study of Perina to explore what may have shaped Gajdusek, or at least to try to imagine how he thought. She gives Perina a cold childhood coupled with a strong intellect as a partial explanation of his bloodless narcissism. The conceit of the story is that Perina has written his memoir during his relatively brief imprisonment, with the manuscript edited by a sycophantic supporter. Perina recounts his career and accomplishments with a low-key ruthlessness. He sketches out his early life and education, but the meat of the book comes with his initial trip to an unspoiled island in Micronesia. Traveling there with a charismatic anthropologist, his tale picks up an undercurrent of repressed homosexuality. Perina’s obsessive desire is as subtle as a teenage crush as the party slogs through the island jungle in search of a lost tribe. Where Gajdusek made his reputation by figuring out how kuru, a brain-destroying disease, was propagated, Perina identifies an agent that grants physical immortality at the cost of gross mental deterioration. This idea of a poisoned gift is an intriguing one but Perina seems remarkably uninterested in understanding the mechanism or finding a way around the side effect.

This is largely where The People in the Trees breaks down for me. Much of the book mires itself in petty jealousies and describing the inevitable destruction of the island paradise, before getting to the power struggles and parallel collapse of Perina’s adopted family. It’s annoying because Yanagihara isn’t really being true to her character. His curiosity and arrogance last long enough to earn him a measure of fame, but then desert him. He spends the first section of his memoir caught up in contempt for most of the people around him, fully convinced of his own brilliance, and then seems swept away by all the events of his life. While there is some foreshadowing earlier in the book, he offers little explanation for why he began adopting children. I wouldn’t expect him to admit to pedophilia, but he hardly seems to be the kind of person to act with charity and take no credit for it. Finally, that admission in the final pages is as blatant and self-aware as the rest of the tale is nuanced and repressed. Where Gajdusek justified his own acts as “consensual” and culturally normative for his victims, Perina’s revelation is an undisguised case of rape, committed in anger.

Yanagihara’s prose is well written and very descriptive. Her contrast between the unspoiled U’ivu on the first visit and the wasteland after the world invades the island group is moving. Despite those strengths, though, the whole book only manages to present a handful of significant events as the skeleton of the story. Her detailed language can be as lush as the jungle she describes, but it is not enough to make the tale more than a rough sketch.