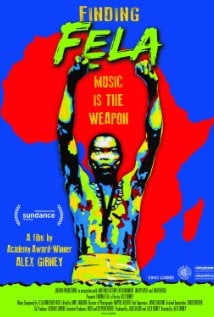 [xrr rating=2.0/5]As Roots drummer Questlove has pointed out, any attempt at a stage or film musical based on the life and work of Fela Kuti, the Nigerian Afrobeat pioneer and activist, would run into the problem of his work’s intense length. Fela compositions hover around the 10-minute mark at minimum, and toward the end of his career he was penning single compositions that could fill both sides of a vinyl LP. To shorten the 12-minute preambles of something like “Gentleman” is to fundamentally alter its power, which in turn calls into question anything that must truncate Fela in order to explain him.

To its credit, Finding Fela tacitly admits that it faces the same challenge, though its own summary comes off as a boilerplate musician biography. You can more or less write out these arcs without ever having heard of the subject in question: humble beginnings flecked with precocious talent; the slow grind toward a signature sound; a flashpoint moment that resulted in a leap of ambition; a period of notoriety; and the long, slow decline. Granted, in Fela’s case, the rise and fall are connected less to record sales and inflamed egos than the increasingly brutal intervention of the totalitarian regime he fearlessly mocked. Certainly, no documentary about Bob Dylan ever had to contend with military police murdering his mother in retaliation for a song.

That angle obviously elevates Fela’s story above that of the average star, but it also gives Alex Gibney license to mix the two weakest forms of documentary: the musician biography and the political overview. The film delivers background on Nigeria’s period of post-colonial instability with matter-of-fact tedium, providing dry context for Fela’s revolutionary impact. Even the horror of the military’s raid on his complex is approached through the musical’s handling of that information, adding yet another layer of remove that dilutes the most shocking moment of Kuti’s life.

Where the movie hits its stride is in its more unvarnished interviews. Sandra Izsadore, who introduced Fela to Black Power politics and prompted a leap forward in his lyrical aims, hilariously recounts her culture shock at accompanying Fela back to Nigeria and discovering he already had multiple wives. Fela’s son Femi is even more entertaining, gleefully puncturing some of his father’s self-mythologizing inaccuracies and also pointing out just how many people’s safety the man casually risked. Gibney also gets great input from people less connected to Fela’s life, such as Questlove, who provides a simple but evocative overview of what set Kuti’s drummer, Tony Allen, apart and made him so indispensable to Fela. Bill T. Jones, co-creator of the “Fela!” musical, also shows a moment of bracing empathy with Fela when the subject of AIDS comes up and he, without dwelling on the subject, relates to an artist’s refusal to be defined by the disease.

For the most part, however, the film fails to truly probe at its subject. Jones, seen assembling the show behind-the-scenes, raises the subject of Fela’s misogyny and regressive sexual politics, and the film dutifully shows footage of him marrying 27 women at once, or giving an interview where he defends striking insolent wives. Yet there is no real engagement with this wrinkle in the icon’s image, much less an attempt to square his thoughts with how instrumental women were to his development, from being born to an activist mother to being further awakened by Iszadore. Granted, there’s likely no way to fully reconcile Fela’s contradictions (or anyone’s, for that matter), but Finding Fela feels so locked into its bio-doc beats that it never stops to follow one of the many tangents its raises.

A greater sin still is how the film saps Fela’s music of its energy. It’s not entirely Gibney’s fault: no documentary about an artist has ever captured the thrill of personal discovery of that artist’s work. Being flatly informed of the military raid on Fela’s Kalakuta Republic compound after hearing a snippet of “Zombie” pales in comparison to hearing all of “Zombie” first, being galvanized by it universal anti-military lyrics, then gradually filling in the context around that composition. When it is served to a viewer already wrapped in significance, the whole progression of immersion is thrown out, teaching detached admiration instead of passionate discovery. But then, such a thing by definition cannot be imparted by another party, which makes movies like these feel so counterproductive. As ever, the final word on why an artist is so great is the work they left behind, and given the directness with which Fela tackled his political identity through song, a few involved listens to “Confusion” or “Teacher Don’t Teach Me Nonsense” will give a more complete sense of the man than this documentary.