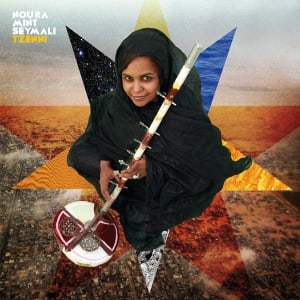 [xrr rating=4.5/5]Mauritania’s Noura Mint Seymali kicks out the jams in her international debut full-length, Tzenni, a masterpiece that incorporates spidery guitar lines, upbeat percussion and Seymali’s soaring vocals to jaw-dropping effect. While some Afro-pop records come off as worthy but dull, and others try to ape whatever trends are prevalent in the West at the time, Seymali’s offering avoids both of these traps. Tzenni is relentlessly inventive and invigorating, with its twangy guitar lines constantly pushing the boundaries of “African” music even as her vocal stylings keep the material firmly rooted in tradition. This is, in brief, a terrific album; not just one of the best “world music” records you’re likely to hear all year, but one of the best in any genre.

The album opens with the string-bending guitar line of Seymali’s husband and guitarist, Jeiche Ould Chighaly, who is soon joined by the rest of the band, which includes Ousmane Touré on bass and drummer Matthew Tinari. That opening track, “Eguetmar,” rattles out of the speakers with a shuffling, bluesy rhythm that perfectly underscores Seymali’s soaring vocals. Like many practitioners of the “desert blues” genre—a group that includes Tinariwen, Terakaft, Bombino and many others—the joyous noise of Seymali’s band can appear ramshackle at first. But this low-key vibe belies the careful musicianship at work here. The tunes appear spontaneous, but are in fact carefully constructed and meticulously performed.

This grows apparent as the album wears on. Title track “Tzenni” increases the tempo a notch or two but keeps the basic template in place, while the six-minute mini-epic “El Barm” is granted enough time to wander and stretch its groove. Chighaly’s guitars sound as if they’re passing through any number of effects pedals here, certainly phase shifters, adding to the otherworldly mix of guitar wankery and traditional rhythms and beats. “El Mougelmen” continues in this vein, with wah-wah creeping into the mix. To call this unexpected, in combination with Seymali’s undulating vocals, would be an understatement.

A particular standout is the brief but powerful “Hebebeb (Zreg),” which offers up a dirgelike tempo, plenty of reverb on Seymali’s voice, and something approaching a trance-inducing lament. On an album of engaging and unexpected sounds, this song—which is stripped to the minimum in terms of instrumental ornamentation—is particularly notable. Elsewhere, on “Tikifite,” unison vocals crop up, a simple way of adding a bit more sonic interest into the mix,

The album is remarkably consistent, and by “consistent” I mean “jaw-droppingly awesome.” This is a record that presents a theme with variations, so if you don’t respond to the first tune or two, you’re unlikely to suddenly change your mind halfway through. Listeners who do fall in love with the band’s sound, however, will be happy that there is not massive disruption to the sound. I suppose this could be interpreted as a criticism—“Hey, he says the songs all sound the same”—but this is not accurate, as there is enough variation in tempo and arrangement to keep things interesting. More importantly, Seymali’s voice and the band’s razor-sharp arrangements are more than capable of carrying an entire album.

For music lovers not living in Mauritania, this album will be a revelation. The recording is impeccable, the performances are first-rate, and the music itself is unlike anything you’re heard before. Do not miss this.