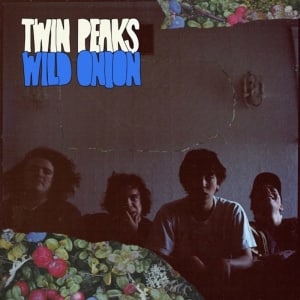 [xrr rating=3.75/5]Rock ‘n’ roll is the domain of the young, at least in the world of Twin Peaks. The Chicago quartet of youngsters has one of the best and most unbridled rock records this year with sophomore LP Wild Onion. Across the 16 tracks, there is the vigor and sloppy tenacity that comes with youth, the type that is inimitable. That said, this is not a record that gets by on the sheer energy it blasts out. No, the band displays a focus when necessary and their brashness is supported by songwriting chops and an abundance of hooks.

Take the raggedy opener “I Found a New Way,” for example. The tune rollicks with a steady guitar chord that hardly varies, yet it galvanizes the listener for what is in store. Clay Frankel — one of three lead vocalists — spits and snarls his lyrics in a spot-on Iggy Pop impersonation. Come the second track, “Strawberry Smoothie,” the aesthetic is already shaken up, Cadien Lake James taking over vocal duties on the hard-hitting, sludgy affair built on metronomic percussion and roiling guitar parts. The song on its own isn’t that memorable, but the juxtaposition with “I Found a New Way” establishes the band’s mercurial approach and showcases their greatest strength, that being their diversity.

With three members writing and singing, there is an inherent variety. A mélange of different influences pops up throughout, and Twin Peaks don’t shirk from displaying said influences with pride. James’ “Mirror of Time” is a discordant take on ’60s pop, with a light melody and a Big Star vein of winsomeness, while his “Strange World” is a slice of lilting, psychedelic folk and “Ordinary People” is surreally ethereal. His “Telephone,” by contrast, is a bouncy number steeped in New Wave textures. “Flavor” might as well have been written by the Replacements, a raver that has one of the most infectious choruses consisting of the belted out “Flavor your heart and your soul” and featuring a surprising acoustic guitar solo. Bassist Jack Dolan’s cuts, “Sloop Jay D” and “Fade Away,” are barn burners that bear Thee Oh Sees’ incendiary approach, Dolan singing irreverently crass lines like, “You got me feeling so lucky/ And I hope that you fuck me.”

Though James gets the bulk of the frontman duties (nine of the 16 cuts are his), Frankel’s songs the most distinctive of the bunch. “Making Breakfast” is not only far and above the best track on the record, it’s one of the best songs of the year. Frankel already displayed his Stooges penchant in kicking off the record, and here he is channeling Lou Reed or the Dire Straits in his diction, resonant timbre and streetwise swagger. A head-bobbing, toe-tapping bass line sets the cavalier tone, Frankel carefree as he delivers such musings as, “Nothing is forever/ That’s right, but don’t let it get you down.” That debonair attitude gets a reprise in the sunglazed drift of “Sweet Thing,” the more relaxed tempo adding to the insouciance.

Unfortunately, Twin Peaks overplays their hand in the sheer amount of songs. At 16 cuts, there is no getting around the fact that the prodigious tracklist could have benefited from some culling (the dream jazz instrumental “Stranger World” is particularly extraneous). There is simply too much here, resulting in the momentum faltering in the latter half. Ironically, the diversity that is the band’s ace in the hole itself becomes predictable.

That aside, Wild Onion is a stellar record of ramshackle, invigorating rock. Yeah, Twin Peaks might not have much in the maturity department, but that is what is so damn refreshing. The album catches them smack in the middle of their formative stage, before age, industry or pretention has bogged them down. Their skills belie their age, and the fun and charisma they ooze out makes you feel 20 again too.