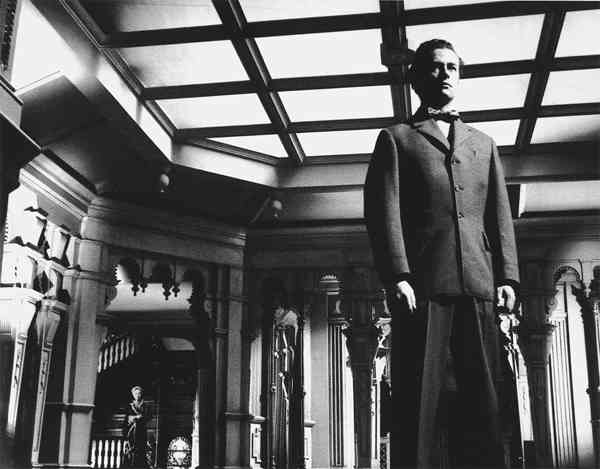 The Magnificent Ambersons will forever exist as a shade of itself, haunted by the specter of its own butchered potential. By now the story surrounding the film is more well-known than the film itself: Orson Welles submitted his first cut to RKO before heading off to Brazil to work on an unrealized project, at which point the studio hacked 40 minutes from the film, replaced the dour original ending with an upbeat cop-out, then ultimately destroyed the excised footage, forever consigning that mythic “true” cut to the fevered imaginations of cinephiles. No discussion of the film can avoid this elephant in the room, but if it exists only in butchered form, what remains is nonetheless an extraordinary document that stands up alongside its canonical predecessor.

The first thing that sticks out about the film is its synthesis of Welles’ media explorations. The director himself reads a narration in the style of his Mercury radio plays, while the direction marries arch, stiffly theatrical design with the pure cinema Welles displayed (and learned from collaborators) on Citizen Kane. If Kane often gets read as, intentionally or not, biographical, Ambersons more consciously summarizes Welles’ ambitions, his alchemical blend of nostalgic classicalism and brash, youthful unorthodoxy.

Consider the contrapuntal relation Welles’ stately, warm voiceover has with the actual events on-screen. At the start of the film, the director lays on the misty-eyed nostalgia, talking of a time in turn-of-the-century Indianapolis when a lady could hail a streetcar from the second floor of her home and it would wait diligently for her to finish preparing and come out to meet it. Yet as the subject turns to the Amberson family, the cracks start to show: we see Eugene Morgan (Joseph Cotten) trying to woo young Isabel Amberson (Dolores Costello) by playing in a band that the narrator gently praises, but on-screen Eugene gets flustered and falls upon his bass viola, shattering it. At last, even the narration hints at a darker truth under the façade of idyll, saying “the magnificence of the Ambersons was as conspicuous as a brass band at a funeral.”

As with Kane’s Xanadu, the Amberson family residence is an old-world relic in a setting that does not support it. At least Charles Kane’s palatial home was a monument to the nouveau riche mindset, though; the Ambersons live like aristocrats in Indiana, creating a cognitive dissonance between their archaic existence and surroundings that already didn’t support them and are now on the cusp of full industrialization. Welles uses the same tricks employed to turn Xanadu into a prison to emphasize what a dead space the house is, how finite its luxury. Sure enough, when Isabel rejects the self-made Eugene for the more class-appropriate coupling with the loveless Wilbur, the family’s downfall is gradually set into motion. 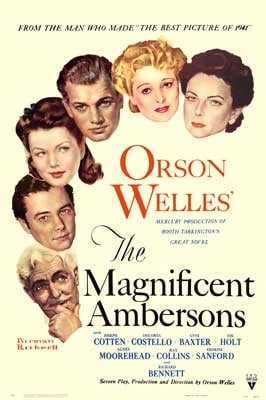 If that sounds symbolic, it is, and Ambersons plays heavily on the pregnant meanings of its many thwarted affections: Eugene’s reluctantly rejected feelings for Isabel, the torch that Wilbur’s sister Fanny (Agnes Moorehead) carries for Eugene, and, eventually, the Oedipal protectiveness that Isabel’s horrendous son George (Tim Holt) feels toward his mother. Welles, who cut his teeth on stage adaptations that pared down Shakespeare to their thematic essentials, could sometimes be symbolic to a fault, but if these conflicts are simple, the director aestheticizes them in inventive ways.

The film makes good use of these stilted, psychologically facile character ties by marrying them to the chilly remove of the images. Where Kane often masked how funny and personal it was with its deeply technical camerawork, this film uses its intricate mise-en-scène to reflect the self-denying strictures of the Ambersons’ way of life. Welles’ work here suggests he could have made a great Edith Wharton adaptation, especially The Age of Innocence, another book that pits an entire sociality based on revealing nothing but one’s best mask rubbing against broiling, indecent, human passions.

Besides, if the camera operates from a literal and figurative distance, the actors do their part to flesh out thematic roles with pathos. Cotten plays Eugene with a quiet dignity, capable of suggesting both Eugene’s evergreen feelings for Isabel and an outward sense of having moved on. Moorehead, on the other hand, visibly downtrodden with the pressure of supporting her brother’s marriage, sympathizes with the frustrated love between the object of her desire and her sister-in-law, while her own passions for Eugene make her shake and snap at George for bringing to the surface relationship tensions she tries desperately to hide.

But Holt really does steal the show as George; the character is established as a hellish child who rides into frame in long curls and an outfit that makes him look like the Dauphin hiding out in the Midwest, but when Holt enters as the older boy, now a sophomore in college, he manages to instantly build upon George’s younger self. In his early 20s at the time of filming, Holt nonetheless looks a good decade older, a distortion befitting George’s haughty behavior, already settled into the role of a prince. He speaks even to elders as if they were toddlers not worth his time, and he even ruins a relationship with Eugene’s daughter Lucy (Anne Baxter) by consistently belittling her father over his hatred of the man’s past with his mother, and also for the meritocratic future the car magnate represents. (Holt’s contemptuous pronunciation of “auto-MO-bile” is a one-word masterpiece.)

Nonetheless, George does not own sole credit for ruining the Ambersons. He is merely the catalyst for the havoc time was already wreaking more slowly. He forces the family to deal with its toxic self-regard in the open; in one of the better alterations from Welles’ original cut to the release version, a scene of George instructing Fanny to turn Eugene away from Isabel’s deathbed is replaced by one of George, Fanny and George’s uncle Jack (Ray Collins) all telling Eugene to leave, the camera tilting and panning to take each of them in and to establish how surrounded and outnumbered Eugene is. That’s not the only decent change; truth be told, if the rushed second half of the film betrays a radical restructuring, it also works in tandem with the unraveling of the Ambersons’ fortunes, driven along by George’s hubris.

Only the ending, with its inexplicable reconciliations, is truly a black mark on the released film. The Magnificent Ambersons is a wrenching tragedy driven by jealousy and status, and its tone-deaf ending (which actually is more faithful to the source material than Welles’ script) wraps a beautiful summary of its maker’s talents across several performing arts formats with an eerie precursor of a career to come. If the film’s pre-coda conclusion shows the collapse of a system of comfort and luxury, so to does its tag forecast the end of Welles’ own briefly enjoyed fortunes as an uninterrupted genius. Kane set the standard for the director’s career with a debut that many peg as the greatest of all films, but it was Ambersons that really pointed the way for how hard a time Welles would have carving out a long-lasting career.