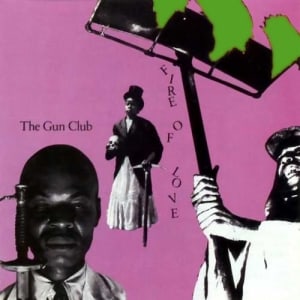 [xrr rating=4.5/5]More than 30 years after its initial release, there’s still nothing that sounds exactly like the Gun Club’s Fire of Love. Sure, several indie-rock statesmen, Jack White and Japandroids among them, have cited this L.A.-based punk-roots-blues outfit as an influence. The latter act memorably covered “For the Love of Ivy” in their live shows for years before laying down their own studio vision of the song on the much-beloved 2012 record Celebration Rock. The Canadian pair even stole the Fire of Love lyrical phrase “sexual red” for the same album. To be sure, there are hints of the Gun Club’s fiery punk rhythms coupled with country twang on early Uncle Tupelo tunes. Yet, this Superior Viaduct reissue of the Gun Club’s 1981 debut (which marks the first time the album has been commercially available in over a decade) reminds the listener how singularly weird, consistently wild and relentlessly thrilling this oddball outfit really was.

Fire of Love is in many ways a chronicle of frontman and Texas native Jeffrey Lee Pierce’s search for musical authenticity. Troubled by punk music’s strict formalism, the theatrical singer-songwriter went through periods of obsession with glam rock and reggae before deciding both had become too commercial. American roots music was where it was at, and, by combining the soulfulness of the Delta blues, the emotional honesty of “real” country music (as represented by Johnny Cash) and the musical intensity of punk rock, Pierce found a winning formula. Given a dose of the Flannery O’Connor and Faulkneresque Southern Gothic, the Gun Club’s music was at once fresh and scary.

Chris D. of the Flesh Eaters is credited with producing half of Fire of Love’s tracks as well as designing the eerie, playful album cover, so part of the record’s streamlined, mossy vibe may be attributed to his handiwork. The disc’s opening track, “Sex Beat,” lays down the fundamentals of the Gun Club sound in no ambiguous terms. Ward Dotson’s propulsive, crunchy guitar and Terry Graham’s metronomic drumming creates the perfect punk backdrop for Pierce’s deadpan, half-spoken vocalizing about surreal sex (we get lines like “You make my tropical apartment bed your sacrificial pool” and “We can fuck forever, but you will never get my soul”). The band’s roots base is revealed on the caustic cover of Robert Johnson’s “Preaching the Blues,” wherein Dotson’s slide guitar and Graham’s country shuffle yield an off-kilter downhome vibe.

The group’s influences extend beyond the most revered bluesman from the American past. The Velvet Underground are an obvious reference point on a tune like “Fire Spirit,” which comes off as spoken-word poetry over an animated rock background. “Ghost on the Highway” deconstructs Johnny Cash’s “Tennessee Three” formula, with a hint of “Folsom Prison Blues” being derailed from its train tracks. Album closer “Goodbye Johnny” wallows unashamedly in riff-based, Rolling Stones-like rock ‘n’ roll.

On an album full of highlights, there’s no mistaking the apotheosis of cool: the one-two punch of “She’s Like Heroin to Me” and “For the Love of Ivy,” the record’s fourth and fifth tracks respectively. “She’s Like Heroin to Me” is a giant “fuck you” to all tender love songs. Pierce sings (or yowls, more accurately) about a love that is at once irresistible and dangerous (“She cannot miss a vein,” he insists) while Dotson’s twangy guitar, Graham’s lopsided country kit and Rob Ritter’s driving bass form their own kind of tantalizing drug. On “Ivy,” the word “hell” is repeated ad nauseam throughout the opening verse, giving us a sense for what this tune is trying to invoke. This Southern revenge fantasy is peppered by bouts of intense rhythm-section energy juxtaposed with moments of nervous quietude. We believe Pierce when he sings, “I was all dressed up like an Elvis from Hell.”

After Fire of Love, the Gun Club would release six additional LPs amidst various lineup changes before Pierce’s untimely death at age 37 in 1996. The group’s leader was known to suffer from a plethora of unfortunate health problems as well as engage in an unyielding party-hard lifestyle. While each of the group’s subsequent releases had its own merits, none of them quite recaptured the quirky energy of the Gun Club’s auspicious debut. This re-release will allow a whole new generation to take in the album’s spine-chilling, goosebump-inducing vibes. Fire of Love has lain dormant for far too long.