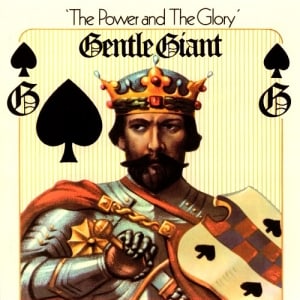 [xrr rating=4.0/5]Steven Wilson is a sonic archaeologist, patiently brushing away the sand and the cruft to reveal the bright beauty of the past. The Porcupine Tree frontman divides his professional life between learning from the classic prog rock groups, celebrating their monumental accomplishments and making his own contributions to the art. Ever since Robert Fripp bestowed his blessings on Wilson’s production work by inviting him to be the curator for the King Crimson back catalog, he’s tackled a number of his earliest influences and remastered their classic works with loving care. Gentle Giant’s The Power and the Glory is his latest project and he’s done a brilliant job of cleaning it up and fine-tuning the impact, both in stereo and in 5.1 surround sound. This engineering effort can be underestimated and undervalued, but the comparison between Wilson’s mix and my old vinyl (or what you may find online) is stunning. This release is rich and lively, and somehow newly relevant.

It helps a lot that this music is somewhat timeless. Sure, the complexity and technical expression are anchored in an early ’70s aesthetic, but Gentle Giant often struck out on their own path and weren’t really concerned with what their progressive contemporaries were doing. Moreover, the band members were each adept at multiple instruments and they could draw on a wide range of inspirations from folk to baroque to avant-garde jazz.

Wilson makes his mark from the start. “Proclamation” opens with a grey-noise wash of crowd sound quickly overtaken by an electric piano riff and the clarity is crisp. The mix cleanly separates Derek Shulman’s vocals from the sparse bars of keyboard; both are lightly reverbed but the delays are different enough to create a good separation between the two. The keyboards recall Supertramp’s early days, but the angular phrasing behind the vocals is distinctly tied to Gentle Giant’s sense of rhythm. By the third verse, the other instruments have joined the interlock. This sets up a tight melodic interlude that transitions through a series of moods. I can’t help but savor the interplay of beat and harmony as they mesh and separate. This is the band’s hallmark: the music is unpredictable and intricate, but a structure emerges and, by the end, the patient listener is rewarded as order coalesces.

The next track, “So Sincere,” winds its way between tentative, sidling melodies and stumbling King Crimson style exclamations. The stylized singing takes advantage of some very old-school close harmonies, but the most engaging feature is how the players stay tightly aligned, whether it’s the piano and guitar leapfrogging one another or a riff skittering across a series of instruments. This is among the more accessible tunes on the album, but it’s still quite challenging and far from casual listening music. The piece seems almost schizophrenic as it tries to encompass a feverish set of ideas in just under four minutes. Rather than providing no handle, there are a multitude of entry points and the song is too restless to let any dominate for long. But despite the challenges, they never drift off into incomprehensibility or self-indulgence.

The Power and the Glory proceeds through its allegory of idealism and corruption. It’s less heavy-handed than some concept albums, relying mostly on close attention to the lyrics, although “Valedictory” is more overt as a tarnished reworking of the themes from “Proclamation.” Along the way, Gentle Giant traipses across genres, showing off their many-faceted musical interests: a jazzy turn on “Aspirations,” intense fusion on “Cogs in Cogs,” folky touches on “No Gods A Man” and the hard edge of “Valedictory.” Like the 2005 remastered version, Wilson’s package includes the title single that was never part of the original release. While the band has dismissed this track as atrocious, it really isn’t that bad, even if it’s a bit bouncier than the other songs. Where the 35th Anniversary edition included a live version of “Proclamation,” Wilson opts for an instrumental outtake of “Aspirations,” which works remarkably well in this form. Kerry Minnear’s piano anchors the piece along with Ray Shulman’s warm bass. Without the vocals, it’s easier to fall into the reverie of the groove.

Listening to The Power and the Glory now, it still stands out as a strong, coherent piece, but it also plays up the differences between Gentle Giant and their more long-lived contemporaries. The guys in Gentle Giant turned inward, spurring each other into deeper musical expression, while other bands like Yes, Genesis and Styx, who were hardly dealing in trivialities, each found formulas to connect with a larger audience. Later in their career, the band would soften their intensity in a bid to make the same transition, but they never quite found the balance between the complexity of their ideas and the accessible clarity that the market demands. They’ve never tried to resurrect the band in the years after their 1980 split, in recognition that they wouldn’t want to compromise on the integrity of their legacy. As this remastered version shows, their ideals powered a strong artistic vision and a musical aesthetic you rarely hear anymore.