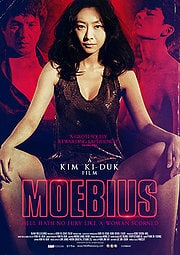 [xrr rating=3.25/5]There are a handful of films, both in and outside the canon, in which a character is castrated. But a film in which the entire narrative is built around such a castration? That’s a rarity. Thankfully, we live in a world with Kim Ki-duk.

A relatively recent castration-heavy film, Mitchell Lichtenstein’s Teeth, is played for laughs. Moebius, on the contrary, may get a laugh out of those who aren’t too disturbed by it—and even those who are during some of the Google searches—but by and large it is serious to a fault, particularly once the narrative becomes clear. Its visceral thrills linger, but while Teeth worked both as comedy and horror, Moebius will certainly be remembered as “that family castration movie.”

In it, a mother, tired of her husband’s mistress (it’s worth noting that both women are played by Lee Eun-woo), decides to cut off his penis. Failing to do so, she takes it out on her son instead, and the father will go on to mutilate himself out of guilt. Yes, Moebius is blatantly, ham-fistedly Freudian, even Oedipal, although it does twist those archetypes enough to be removed from them, but it still works at least as often as it doesn’t. We see the side-effects of castration—the difficulty of using the bathroom, the endless mocking, the alternative, masochistic methods of pleasure that it necessitates, how all of this must play out within the familial space in rather grim detail—all without dialogue. The only human voices are either terrified screams or orgasmic moans, both of which actors do an admirable job selling. Occasionally the approach is gimmicky, as there are a handful of moments in which you can’t help but wonder if alerting someone of immediate danger might be a good time to break the silence, and there are a number of lower-key situations that almost certainly would go down a bit easier with words, but no dialogue also means that characters seem instinctually, carnally compelled to the actions they take. It makes it even easier for on-the-nose readings, but the alternative—extended conversations about penis transplants—would likely far too egregious to believe and take seriously. Too much humor and the whole thing becomes a joke, too much drama…well, would we even be able to take it seriously if it wanted us to? As soon as characters begin to talk, they begin to think, and the primal power Moebius depends on evaporates. The lack of dialogue may feel forced a bit too often, but it’s the only way to tell the story. It allows instinct and compulsion to take over, which the film desperately needs.

Indeed, most of Moebius’ value comes from that story and its telling. In the interest of avoiding spoilers, it should suffice to say that it does not stick the landing (the title suggests what will happen, but the film does not sell it). But along the way are a handful of memorable scenes, including one of the most bizarre “sex scenes” ever filmed, in which a knife in the back becomes explicitly phallic as a source of autoerotic masochism. Kim’s mise-en-scene and camerawork are restrained and purely functional, likewise a way to maintain the film’s instinctual modus operandi, but one cannot help but wonder if the lack of dialogue, which allows endless opportunity for visual expression, could have somehow elevated this tale and made it more than bait for the most literal-minded amateur psychoanalysts.

Then again, attempts to venture outside this realm, namely in its intimations of religion (resemblances to Spring, Summer, Fall, Winter…and Spring end there) are baffling and unnecessary, giving the film more than an air of pretentiousness. And Moebius is doubtlessly pretentious, a sort of game of academic-visual mad libs, but some of the combinations are interesting and effective regardless. It suggests sexual conditioning as masochism moving from a necessity to a preference, while gender dynamics and power-relations are stripped bare, reconfigured and played out, even if it is tough to answer “to what end?” Still, a bit of ambiguity does the film some good; it’s easy enough to graft on one theory within cultural studies, a second would be intolerable.

And yet if Moebius is intolerable, it’s surely on a visceral level. For those who can stomach it, it’s a unique viewing experience, and a strangely rewarding one. It blatantly aspires to be more than it is, but that does not mean that it is worthless. On the contrary, there is a lot to admire, even in what does not work, and watching these characters march forward, compelled to let the film play out for better or worse, is a pleasure in an irony-laden age. Nothing is riper for ironic distanciation than a Freudian castration epic, but Moebius plays it straight and is better for it.