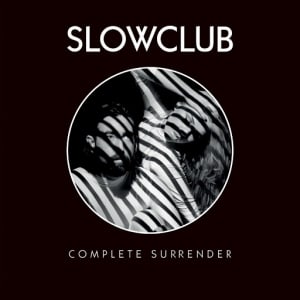 [xrr rating=3.0/5]An artist’s longevity often depends on the all-important sophomore album. It can solidify their place among critics or, better yet, improve their sound. After their debut album Yeah So, Slow Club – the duo of Rebecca Taylor and Charles Watson – hit their stride with the twee-pop Paradise. Theirs is a world of eccentric pop and vocal harmonies with a little soul for good measure. The third time around, Slow Club subdues the daring approach of previous albums in favor of sleeker pop production. With streamlined arrangements and more Northern soul and R&B influences, Complete Surrender continues the band’s habit of constant experimentation, but the result is inconsistent and lacking the fearlessness so appealing on Paradise.

With the notable addition of strings and brass, new arrangements heap on the soul and aim for heartache unprecedented in the band’s work. Taylor’s powerhouse vocals are a constant, and here she taps into her emotional side with a more nuanced performance. As with previous albums, vocal duties are distributed between Taylor and Watson, with each track generally featuring one taking lead and the other in supporting harmonies, resulting in a conversation that takes place over the course of the album.

The duo’s interplay begins immediately on “Tears of Joy,” a melancholy track about lost love. Taylor and Watson’s vocals are at the forefront, the sultry beat augmented by Taylor’s trademark
drums. This quiet start gives way to heftier pop beginning with “Everything Is New.”Their matured writing is evident in “Everything Is New,” a tortured yet optimistic look at relationships
complete with emotive sighing. Complete Surrender explores complex emotions and is decidedly cathartic, especially when tracks devolve into howling vocals and thundering percussion.

Big finishes are parceled out throughout the album, with gloomier ballads and lively pop songs interspersed throughout for balance. Taylor lets loose on “The Queen’s Nose,” a brassy number with infectious guitar riffs that allow Taylor to show off her powerful lungs. “Suffering You, Suffering Me” is all soul, Motown by way of Duffy. Far removed from the folk sound of Yeah So, this track may be the best example of how much Slow Club’s sound has progressed.

Energetic tracks are unfortunately tempered by slow-burners, to the album’s detriment. The Watson-led “Number One” is desperate to be a tender piano ballad, but its tortured falsetto chorus is forced. Likewise, “Paraguay and Panama” features Watson’s gloomy falsetto over minimal guitar plucking that recalls Yeah So. Considering Watson’s own vocal chops, it’s unfortunate that his tracks pale in comparison to his partner’s. Taylor is best when she’s belting out a stunner, but she can’t carry her own somber solo ballad, “Dependable People and Things That I’m Sure Of,” its unwieldy title a promise of self-pitying lyrics.

Complete Surrender is best in its poppiest moments. When Taylor and Watson mix soul, gut-wrenching vocals and catchy guitar riffs together, the result is irresistible. Standouts “Not Mine to Love,” “Suffering You, Suffering Me,” “Everything Is New” and “The Queen’s Nose” show great progress from the duo. But its attempts to balance grandiose pop and sensitive ballads, are uneven. Dizzying title track “Complete Surrender” and first single “The Pieces,” whose cutesy pop-baiting synth comes from their past twee sound, are very much out of place. They may be catchy, but they lack depth and don’t forward Slow Club’s musical development. “Wanderer Wandering” finishes the album on a high note, proving that despite the missteps, Complete Surrender and Slow Club will endure.