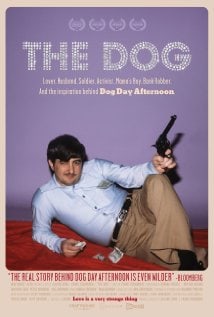 [xrr rating=3.75/5]John Wojtowicz didn’t smoke, drink or gamble—instead he focused all his hedonistic energies on the pursuit of getting laid. Short, homely and equipped with a self-described “little pecker,” Wojtowicz was unabashedly proud of his sexual exploits that spanned women, men and transsexuals alike. Outspoken about his love of getting off, his most defining moment came in August 1972, when a botched stick-up attempt at a New York City bank (one intended to help finance his transgendered lover’s sexual reassignment surgery) led to a 14-hour standoff with police that captured the nation’s attention. Several years later, while Wojtowicz was in prison, his story was made into Dog Day Afternoon starring Al Pacino, something he would revel in for the rest of his life.

Filmed over a 10-year period, The Dog includes interviews with Wojtowicz’s ex-wife, his mother and, of course, Wojtowicz himself while painting a bizarre portrait of a man who gained notoriety simply through having the cajones (if not the wits) to rob a bank and take some hostages. That an Oscar-winning film was made about the robbery (which ended with one of his partners in crime gunned down by police) validated Wojtowicz to the point that, in one interview in his last few years, he went so far as to introduce himself by saying “Hi, I’m Dog Day Afternoon—the real one.”

The Dog digs deep into Wojtowicz’s past to provide a detailed study of an impulsive, often repugnant man with a few screws loose. The interviews with his mother are revealing, as she’s frank in her assessment of her son while also proving that she’s always been supportive of him. When he held a marriage ceremony to join himself with partner Ernest Aron (for whom he would rob the bank a year later), his loyal if not entirely proud mother was in attendance and was interviewed by the curious news media, given that a gay wedding (unsanctioned or not) was simply unheard of in the early ‘70s. But as an elderly woman, his mother is cynical and blunt in her appraisal of son’s outsized pride in having done little more with his life than chasing tail and getting his 15 minutes of fame as a small-time crook.

Sleazy as he often was, Wojtowicz could also be true to his word. After he sold the film rights to his story, he used to proceeds to pay for Aron’s sex change. As the newly-minted Elizabeth Debbie Eden, she promptly dumped him. Both Eden and Wojtowicz would be interviewed by sensationalist-minded TV journalists in subsequent years; he’d continue to profess his love, while she expressed dismay that the sex change did little to improve her happiness. And this all comes as a kind of contrast to Wojtowicz’s earlier work within the burgeoning gay rights movement, one that had to distance itself from him once he became a convicted felon.

The film has echoes of The Devil and Daniel Johnston in it, though Wojtowicz comes off as far less creative and tortured and possessing far greater delusions of grandeur. It takes only a few frames of him pawning off autographs on under-impressed passersby to feel sorry for the guy, even if he carries himself as a complete lecher. Throughout the film, we see him as a man full of contrasts and too much libido. The Dog is a fascinating character study of a hapless man who lived for decades in the shadow of his own myth.