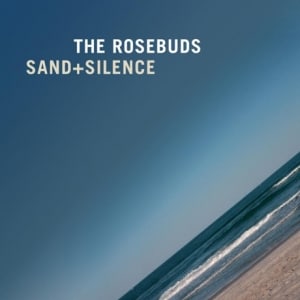 [xrr rating=3.0/5]The new Rosebuds record occupies a space between folk music made by bands like the Lumineers and folk music by bands like Fleet Foxes—in other words, it’s better than trite and less than astounding. Are the harmonies and honky-tonk piano stabs here inviting? Certainly, but those are pretty easy to get right if you’re several notches above tone-deaf. That’s not to minimize that Sand + Silence required a great deal of talent and musical adeptness to create, but now that we live in an era where record upon record is accessible at the click of a button, more than talent alone is needed to stand out.

Luckily, the songs on here are still easy as hell to listen to. Bon Iver’s Justin Vernon produced the record and you don’t get perhaps the biggest name making this style of music to back your stuff unless it’s good on its own. Since the couple behind the Rosebuds (Ivan Howard and Kelly Crisp) divorced, the project has shifted a bit more into Howard’s flavor. But his soulful voice more than makes up for any disparity. For all the personal fracturing within their own infrastructure, they’re great at writing the kind of record that is cohesive and accessible on the first listen. It’s more inculcated with consonance than it is fraught by any kind of strife.

The chorus to album opener “In My Teeth” is sung with an open-throat, clear determination. There’s no gritted enamel even when there’s pain in the lyricism. The center of the group may now be a divorced couple, but they have no time for emotional breakdowns. This is a band who wants to get shit done and they do. The album’s eponymous track “Sand + Silence” makes each one of its elements warble. It’s a solitary, nighttime walk on the beach, spent in reflection about things that went right and wrong on big and small scales. On the next song, Howard sings, “Give me a reason / And I will follow” and it’s backed by the kind of levitating orchestration that gives you more than enough reason to keep listening to the end. Tracks like “Blue Eyes” and “Death of an Old Bike” prove this record can dance all upbeat in the sand as well as it can take on life’s more silent, pensive moments.

Still, even in the face of all its pleasantness, it’s hard not to feel a little thirsty after the record closes. This type of music has proliferated and become so played out over the last couple years that it’s easy to find any number of other albums that do what this one does, but a little better. With Vernon at the producer’s helm, you’d think the Rosebuds would share his predilection for reinvention and innovation. Instead, they sound like a more classic and instrumentally diverse City and Colour. Sand + Silence is a great album to while away the time without wasting it, but you and the band both could’ve probably done something more productive.