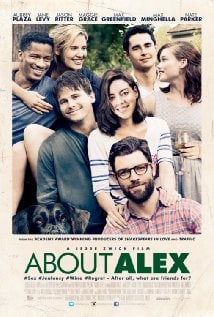 [xrr rating=2.0/5]The “reunion movie” is generally a sad affair involving old friends returning to their old haunts and bitterly asking “What’s changed?” Writer-director Jesse Zwick’s About Alex is no different. Alex (Josh Ritter) weirds his friends out with bizarre Tweets hinting at emotional instability. Cryptically quoting Shakespeare, Alex signs off saying, “Look for me tomorrow and you will find me a grave man” before attempting suicide in the bathroom of his inherited summer house. The resulting fallout brings all of his old college friends back together, guilty about having not been there for him. Flying in from all over the country, Sarah (Aubrey Plaza), a tax attorney, Josh (Max Greenfield), an obnoxious PhD student, Siri (Maggie Grace) and her writer-husband Ben (Nate Parker) and Isaac (Max Minghella), a hedge fund manager, all converge at Alex’s house. The six of them spend a weekend avoiding the subject of suicide and reminiscing about their college days, albeit while trying to exorcise old demons and still harboring grudges against each other for minor offenses long past.

This set-up is so unoriginal as to be superficial, and that is exactly how Zwick’s characters come across. Collectively, they are stereotypical, half-realized Gen Y-ers who never manage to earn enough sympathy from the audience to establish an emotional connection. Rather than be steered by Alex, the film tracks each of his friend’s difficulties. Siri is pregnant and wants to take a new job offer and move to California while Ben, a newspaper editor trying to write a novel, still suffers from writer’s block. Sarah is still hung up on Isaac despite him being in a relationship with the naïve Kate (a suicide hotline worker, oh the trite irony), so she resorts to old habits and has sex with Josh and immediately regrets it, as usual. None of these subplots involve Alex (ever the consummate outsider) whatsoever, but they ultimately drive the film’s action.

Zwick’s film is an unabashed rehashing of The Big Chill only this time the unstable Alex (yes, both films have suicidal Alexes) survives his suicide attempt. Not that you would notice. Courtesy of the final scene’s flashback to the group’s first meeting, we see that Alex never truly fit into the group and was always a shy outsider. His suicide served as the catalyst to bring them all back together to proceed to work out their own misguided relationships – none involving Alex. For the purposes of this half-baked script, Alex’s death would have accomplished the same thing and saved Josh Ritter from endless, dialogue-free scenes making doe eyes for lack of anything better to do. Zwick’s film is in no way “about Alex” but rather about Sarah’s indecision between Isaac and Josh, Siri and Ben’s marital troubles and a group of “friends” who are never believably friends.

The script itself has major flaws, but Zwick muddles things irrevocably when he brings in a critique of modern social media via Josh’s pet-peeves. It seems as though Zwick is aiming for some commentary about false friendship and modern “social” interactions (definitely not a groundbreaking observation), but even that never fully develops. Certainly, it’s easy enough to have Max Greenfield spout viable criticisms of Facebook and Instagram – “You read your newsfeed and that makes you feel like you still know somebody?” – and that would all point to these thirtysomethings being the falsest of friends, connected by a shared university experience and newsfeed, but that is completely lost on the script, which insists on building up this group’s friendship, instilling it with unconvincing nostalgia at every turn. If Zwick had dared to explore that further – a virtual outsider believing so strongly that this group of people he lived with at university were his nearest and dearest friends and an attempted suicide would be the best way to get them to pay attention to him – then we would have a more intriguing movie.

It’s hard to say that About Alex has potential. On one level, it is a disappointing rehashing of an ‘80s film that was successful in its own right. Originality isn’t at its core. The script tries to incorporate contemporary ideas into the tired material but fails to explore them satisfactorily. The reality is that a reasonably decent cast mill around for an hour and a half in a film caught somewhere between middling and failure.